In Hilarious Post, Amitabh Bachchan Reveals 'Shah Rukh Khan's Little One' AbRam Wonders Why He Doesn't Live With Them 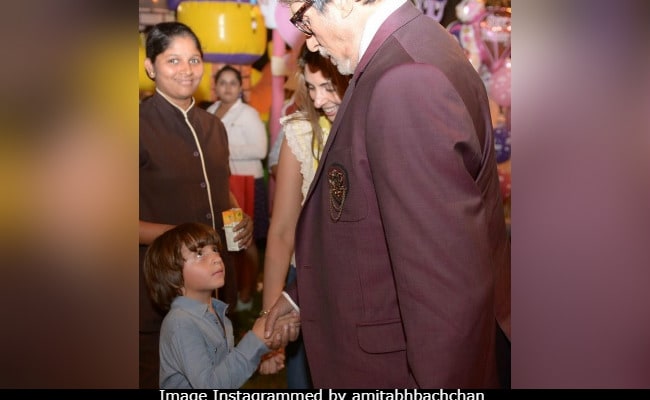 Amitabh Bachchan had a cute encounter with Shah Rukh Khan's youngest son AbRam at Aaradhya's birthday party and had to had to share a photo on Instagram. On Sunday morning, Big B Instagrammed a photo with AbRam, in which "the little one" is greeting Mr Bachchan with Shweta Bachchan standing close by. With the post, Amitabh Bachchan also made a big reveal and said: "... and this be little Abram, Shah Rukh's little one... who thinks , believes and is convinced beyond any doubt, that I am his father's father... and wonders why Shah Rukh's father does not stay with him!" Awww.

Amitabh Bachchan's post reminds us of the Twitter conversation Big B had with Shah Rukh over a photo of AbRam, originally shared by Amitabh Bachchan from Aaradhya's sixth birthday party. After Big B treated AbRam to some cotton candy, Shah Rukh tweeted to say: "Thank you sir. This is a moment he will always cherish. By the way he thinks you are my 'papa' when he sees you on TV."

Thank u sir. This is a moment he will always cherish. By the way he thinks u r my 'papa' when he sees u on TV. https://t.co/2WUiFPAEWy

Aaradhya's birthday party on Saturday was also attended by guests such as Shilpa Shetty, who arrived with her son Viaan Raj Kundra, Esha Deol and her husband Bharat Takhtani who joined in with one-year-old daughter Radhya, Farah Khan, who brought along son Czar Kunder, Neelam Kothari, who came with daughter Aahana Soni, and others. Aaradhya turned seven years old on November 16, when also Abhishek and Aishwarya organised for a party at Mumbai's JW Marriot. This is show Amitabh Bachchan wished his granddaughter:

The customary yearly #birthday photograph for posterity How time flies wishing Aaradhya a very Happy belated birthday , you always make it sooo much fun for the kids @aishwaryaraibachchan_arb and @bachchan,you earned the extra calories Bhaiyyu with all the dancing you did with the kids @amitabhbachchan was sooo happy you could bless my son today, your #energy is incredible! #celebrations #memories #birthdayparty #happiness #friends #celebration #gratitude #kids #growinguptoofast

Happy birthday dearest Aradhya !!! our baby Radhya thoroughly enjoyed every bit of the party! Best wishes & lots of love always from the 3 of us to the 3 of u @aishwaryaraibachchan_arb @bachchan #aradhyabachchan #radhyatakhtani @bharattakhtani3

A post shared by AishwaryaRaiBachchan (@aishwaryaraibachchan_arb) on Nov 17, 2018 at 1:11pm PST

Meanwhile, Suhana and Gauri Khan appear to be in New York, where they were also joined by Shah Rukh Khan.

Two many beautiful women..Too little time. Will be back NYC to savour their company & love again...soon. pic.twitter.com/easmUspiqZ