Amitabh Bachchan is in Jodhpur to shoot for Thugs of Hindostan 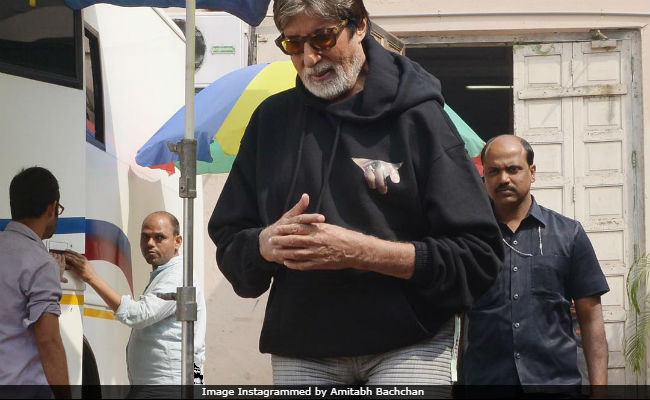 Amitabh Bachchan on the sets of his film (Image courtesy - amitabhbachchan)

New Delhi: Megastar Amitabh Bachchan's wife Jaya Bachchan has assured everyone that he is 'fine'. Speaking about his health, Jaya Bachchan said that the 'heavy costumes of Thugs Of Hindostan' caused him some pain, reported news agency IANS. "Amitji is fine. He has pain in the back and neck. The costumes are very heavy, so, there's some pain. Otherwise, he is fine," IANS quoted Mrs Bachchan as saying. Earlier this morning, Amitabh Bachchan revealed through his blog that he will get team of doctors from Mumbai to 'fiddle around' with his body and help 'set' him up again. Thus, indicating that it's unlikely of him to fly back to Mumbai.

An excerpt from his blog reads, "I am getting my team of doctors in tomorrow morning to fiddle around with my body and set me up again. I will rest and keep informed in process." Big B is currently in Jodhpur to shoot for his forthcoming film Thugs Of Hindostan.

It appears from his blog and also an early morning tweet (at 4:51 am) that the 75-year-old actor has been shooting at odd hours and staying up late for shoots. "It's been rough. But whenever did any be achieved without it. There is struggle and disappointment and pain and sweat and tears. Then, the expectation of all working out. Sometimes, it does, most of the times not. That not is the catalyst," he wrote on the blog. Big B's tweet read, "And just back from work! Bina Mehnat Ke Kuch Nahi Milta (written in Hindi) the city Jodhpur sleeps... and so shall I in a while after connecting with the well-wishers. Love."

Rajasthan Chief Minister Vasundhara Raje also expressed her concern about Amitabh Bachchan's health on Twitter and wished him 'speedy recovery'. She wrote, "Concerned to hear Shri @SrBachchan Ji is unwell. Do let us know if we can be of any assistance. Wish you a speedy recovery!"

Concerned to hear Shri @SrBachchan Ji is unwell. Do let us know if we can be of any assistance. Wish you a speedy recovery!

Promoted
Listen to the latest songs, only on JioSaavn.com
Thugs Of Hindostan, also starring Aamir Khan, Katrina Kaif and Fatima Sana Shaikh, is reportedly an adaption of Philip Meadows Taylor's 1839 novel Confessions of a Thug. The Vijay Krishna Acharya-directed will hit the screens on Diwali 2018.

Amitabh Bachchan is also awaiting the release of his film 102 Not Out. The film, also starring Rishi Kapoor, is slated to release in May 2018.
Comments
Amitabh Bachchanthugs of hindostanJaya Bachchan