This must have made Ranveer Singh's day, who is a self-confessed fan of Amitabh Bachchan 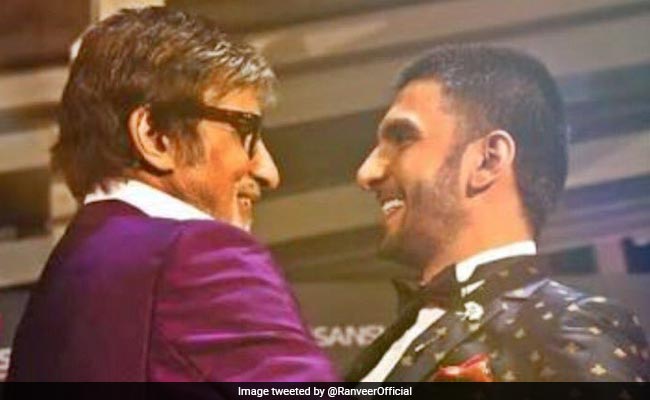 Amitabh Bachchan, who has always had words of encouragement for the newer generation of actors, spoke about how "younger stars" are big influencing the current trends in the industry in an interview with Zoom TV. "You are not pulling the audience in anymore. It's the younger stars, the younger generation, they are the more popular ones," he said. In Amitabh Bachchan's interview, Ranveer Singh deserved special mention, about who, the legendary actor said: "I actually saw Gully Boy 10 times to be able to match or even come near Ranveer Singh. I met him last night and I told him, 'thank you so much, Ranveer. I've copied you and I tried to copy you and I failed miserably." This must have made Ranveer Singh's day, who is a self-confessed fan of the actor.

Amitabh Bachchan loved Gully Boy so much that he had composed hand-written notes for Ranveer Singh, Alia Bhatt, Siddhant Chaturvedi and Vijay Varma - the other actors, who featured in supporting roles in Gully Boy. Earlier in February, Ranveer said the shout out from Big B was the most cherished accolade he could get. "Sabse khas purashkar," he wrote on Instagram.

Ranveer's response reminded us of this tweet from 2018, when Big B had congratulated him for "Padmaavat."

DJ'ing the JUMMA CHUMMA with Deepika and Ranveer at their wedding celebration.. !!!

Well, it's not just Amitabh Bachchan, who is in awe of Ranveer Singh as Gully Boy. It's all of us, basically. Directed by Zoya Akhtar, Gully Boy is the story of a slum boy's rise to popularity in the rap scenario of India. Gully Boy made Rs 100 crore in a week's time.