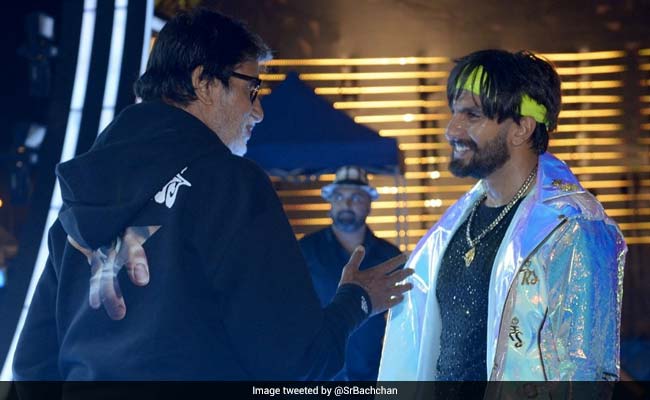 Ranveer with Big B in Mumbai (courtesy SrBachchan)

Amitabh Bachchan watched and loved Gully Boy so much that he sent hand-written notes to each one from the primary cast of the film. Ranveer Singh, who plays the titular character in the film (AKA Murad), recently received a bouquet of lilies and a hand-written note, a picture of which he shared on Instagram with the comment: "Sabse khas." And guess who was one of the first ones to leave a comment? It was none other than Big B's daughter Shweta Bachchan Nanda, who dropped the heart emoji on Ranveer's post. Apart from Ranveer Singh, Gully Boy actors Alia Bhatt, Siddhant Chaturvedi and Vijay Varma also received shout-outs from the 76-year-old megastar.

Over the weekend, Alia Bhatt also shared with her Instafam a snippet of the token she received from Amitabh Bachchan and wrote: "It's not every day you receive a letter from the legend. Grateful." Alia Bhatt played a feisty medical student (Safeena) in the film and has received much critical acclaim for her performance in a supporting role.

Its not everyday you receive a letter from the legend. Grateful

Vijay Varma, who plays the role of Moeen - a drug peddler and one of Murad's closest allies, shared a selfie holding the note sent by Big B and wrote: "That's it. Thappa lag gaya! I'm so so honoured and touched by your gesture, sir. Always in awe and love, your biggest fan, Vijay."

That's it. Thappa lag gaya! I'm so so honoured and touched by your gesture, Sir. Always in awe and love, your biggest fan, Vijay. #GullyBoy #Moeen

Meanwhile, here's where you can find the Gully Boys, chilling with boss lady Zoya Akhtar at a surprise party:

Gully Boy turned out to be director Zoya Akhtar's highest earning film with as much as Rs 111 crore worth of box office collections in as many as 10 days. Almost two weeks later, Gully Boy is still making noise in theatres across the country.