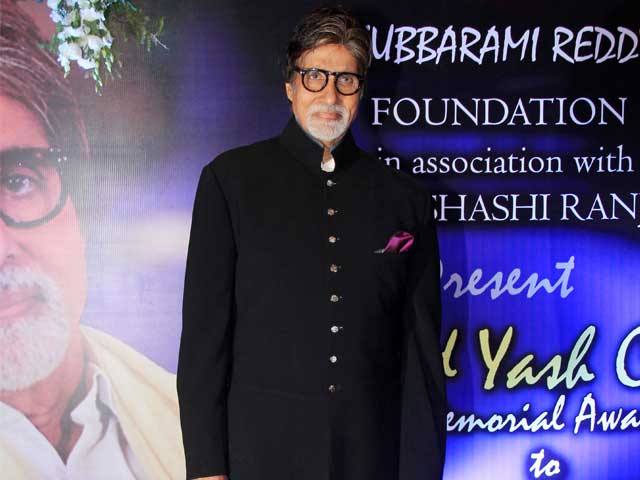 Big B says he doesn't deserve the appreciation

Megastar Amitabh Bachchan was conferred with the Yash Chopra Memorial Award here on Thursday, and said that he is still striving to deliver his best in the Indian film industry.

Maharashtra Governor C Vidyasagar Rao honoured him with the award, which was given to Lata Mangeshkar last year.

"I feel very grateful to have received the honour and I would like to thank (politician) T Subbarami Reddy and all the jury members to consider me for this honour," the 72-year-old said here after the ceremony.

"I don't think I deserve this much appreciation, but I am still trying to give my best and will continue to do so in the coming years with all your love and support," he added.

The second edition of the award ceremony was organised by the TSR Foundation, headed by Reddy. Other celebrities like Simi Garewal, Jaya Prada and late filmmaker Yash Chopra's wife Pamela Chopra were present at the event.

Later, Big B, who has dedicated over four decades of his life to the film industry, took on his blog: "I am eternally humbled and grateful, it was awkward to sit there and listen to all the accolades that come your way."

Promoted
Listen to the latest songs, only on JioSaavn.com
"I have not yet learnt the art of carrying the right expression when listening to praise. And I shall never learn, for I have never believed in the praise that comes my way."

"I am not deserving I know, but it would help if the moment of acknowledgement came within closed doors and drawn curtains."