Amitabh Bachchan Found This Meme On Cricketers And Daughters Funny. Not Everyone Did 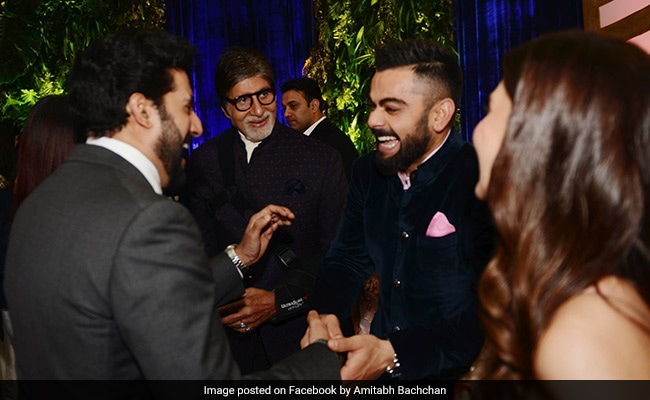 Amitabh Bachchan with Virat Kohli in a pic (courtesy AmitabhBachchan)

New parents Anushka Sharma and Virat Kohli are now busy with the littlest member of their family - a baby girl born on January 11 - and may have missed Amitabh Bachchan's tweet (somewhat questionable but more on that later) but we didn't. The 78-year-old megastar is often tagged in ROFL tweets and memes by his EF (extended family), some of which he re-shares on his timeline. Big B spotted one such on Twitter, which has an Anushka-Virat connection. The tweet, which not everyone will and has not found funny, is based on the theme "Future Ki Women Cricket Team" and has to do with the fact that Virat Kohli's fellow Men In Blue and also some of former cricketers are fathers to daughters. The list missed M S Dhoni and his daughter Ziva out so Big added in his tweet:"Dhoni also has daughter... will she be Captain."

"... and Dhoni also has daughter .. will she be Captain ? 🙏'' pic.twitter.com/KubpvdOzjt

As we said above, the meme is in slightly questionable taste and several comments on Amitabh Bachchan's tweet point this out, also denouncing the undertones of nepotism in the list.

Regardless, Anushka Sharma and Virat Kohli would likely take the post in the spirit of humour that Amitabh Bachchan reshared it in. While Big B hasn't tagged either Anushka or Virat in his tweet, it'll sure be an interesting conversation if the new parents respond. In 2018, Anushka Sharma missed a birthday SMS from Amitabh Bachchan and later, responded to him with a tweet of gratitude.

Thank you so much Sir, for remembering my birthday and sending your kind wishes! (Responding to your sms as I tweet this) 😊😊 https://t.co/dr01PUswIf

Amitabh Bachchan headlined the guest list at Anushka and Virat's wedding reception in Mumbai in 2017. He arrived with his son Abhishek and daughter-in-law Aishwarya Rai Bachchan. This is how Big B had congratulated the couple: "Wishes and love from all of us."

On the evening of January 11, Virat Kohli made the baby announcement along with an update that "mother and baby are both doing well". The couple requested for privacy in their statement and later asked the paparazzi in Mumbai to not click pictures of their daughter: "Hi, Thank you for all the love that you have given us for all these years. We are happy to celebrate this momentous occasion with you. As parents, we have a simple request to make to you. We want to protect the privacy of our child and we need your help and support."