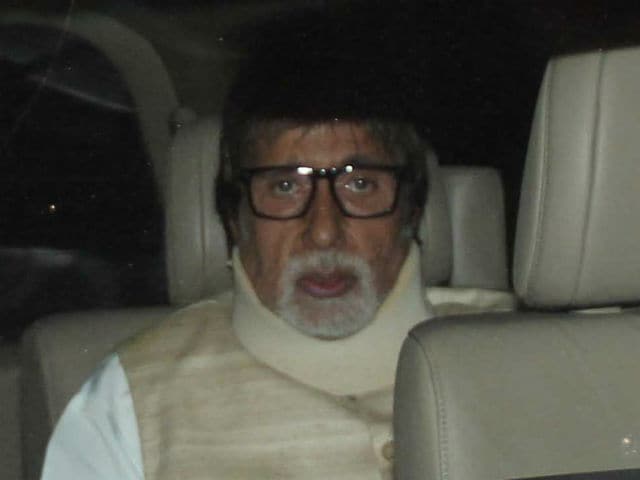 New Delhi: Superstar Amitabh Bachchan expressed his 'gratitude' to everyone for paying condolences on his daughter-in-law Aishwarya Rai Bachchan's father Krishnaraj Rai's death. On Twitter, the 74-year-old actor wrote, "To them that express condolence on the passing of Aishwarya's Father .. my gratitude .. ! (sic)." Krishnaraj Rai died on Saturday evening at Mumbai's Lilavati Hospital. He reportedly had a lymphoma. The funeral was held on Saturday night. It was attended by Bollywood celebrities like Shah Rukh Khan, Sanjay Leela Bhansali, Ashutosh Gowariker, Kunal Kapoor, Manish Malhotra, Simi Garewal, Sonali Bendre, Sikander Kher and others. Krishnaraj Rai had worked as biologist in the army. Here's Mr Bachchan's post.

T 2469 - To them that express condolence on the passing of Aishwarya's Father .. my gratitude .. !pic.twitter.com/aiLUhiTqxM

Promoted
Listen to the latest songs, only on JioSaavn.com
He also posted a message on his official blog, where he wrote, "That call you wait anxiously knowing that it will come, and come it does to end all other calls .. glimpses of reactions in the mind, of the lost one, of those that shall reflect on the lost one .. and suddenly then in the midst of sorrow and grief among the grieved and grieving ." He further writes, "And the happiest of them all, is the one that has gone .. for he is already in the arms of the heavens and in a realm of peace and tranquillity.."

"Mr Rai passed away around 4 p.m. in Lilavati hospital ICU," his doctor told news agency IANS. He was reportedly admitted to the hospital in February. He is survived by his wife Vrinda Rai, son Aditya Rai and daughter Aishwarya Rai Bachchan.