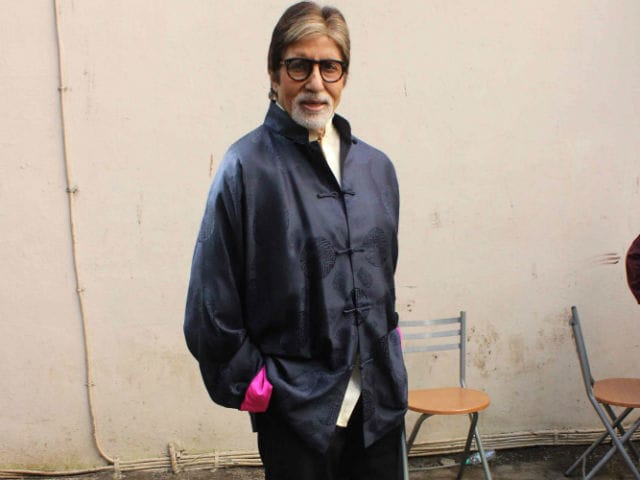 New Delhi: Bollywood superstar Amitabh Bachchan says he finds it "embarrassing" when he travels abroad and foreigners tell him that India is a third world country and a "land of rape". The actor wants India to be known as a first world country.

Big B, who was in the capital to promote courtroom drama film Pink, which features him as a lawyer, said the aim behind making this film was to change people's perception about India.

"The aim behind making Pink was to send its message as strongly as possible. I want people outside to recognise what is happening (in India)," Amitabh said on Friday.

"It's very embarrassing when you visit a foreign country and you see people there talking to you and say, 'Oh you are from India, the land of rape'. It's very embarrassing. I want that to go. I hate it when I go abroad and people say, 'You are from a third world country or you are from a developing country'. Why do they call us that? We all must work towards that and make it (India) a first world country and not a developing, but as a developed country," said the actor.

Directed by Aniruddha Roy Chowdhary, Pink, which released on Friday, is a thriller set in Delhi. The film puts the spotlight on crime against women in cities.

For the promotions of the film, Big B earlier wrote a letter to his two granddaughters -- Aaradhya and Navya Naveli -- in which he spoke about gender issues, marriage and various other issues.

Talking about that, he said: "When we were promoting the film, a lot of people were asking the story and concept of Pink. We were getting a little hesitant as to what we should say. That's when Shoojit suggested me to write a summary of the film in a letter and send it to my granddaughters. It will be for all the girls," Big B said.

So now should there be a letter written to boys too?

"I think you are right. This should happen. I always feel that if we need to bring any change in the society, then we need to look after our children from childhood. We should tell them what is wrong and what is right. We all are equal," he said.

While sharing his experience of shooting the film, the National Award-winning actor said that there were various moments on the set when he broke down.

"All of us had been through that experience while we were making this film. I am not shy to admit that even at 74, there were scenes that moved me," the actor said.

"There were moments when we all broke down. I myself got moved by a particular scene in the film and left the set because I just feel embarrassed to be crying in front of a lady," he added.

Big B further shared that he wants his children -- son Abhishek Bachchan and daughter Shweta Nanda -- to live "equally".

"When I will die after living all that is left in me, I will divide all that I have amongst them," he said.

Asked about the women whom he looks up to for inspiration, the actor said: "First of all my mother (late Teji Bachchan). If you see any values in me, you need to credit my mother for it."