The couple announced the news just a few hours ago and friend, actor Aly Gony has already showered good wishes and blessings upon the duo on social media. 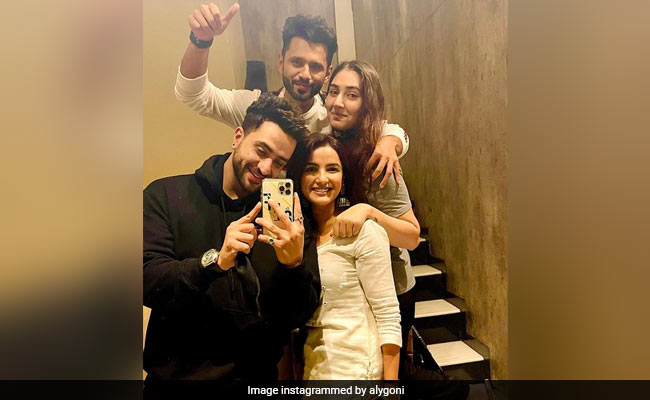 Since singer Rahul Vaidya and actress Disha Parmar announced their marriage date earlier today, a flood of wishes and blessings have garnered the couple through social media. Their co-stars and friends tweeted about their joy on hearing the much-awaited news. Television actor Aly Goni went a step further to wish the two and posted a photo with the to-be-married couple on his Instagram account. In the picture, which is a mirror selfie, Aly is standing next to his partner, actress Jasmin Bhasin while Rahul and Disha are behind them in close hugs. The four are all smiles as they look into the mirror under a warm yellow light.

Aly was evidently overjoyed at the news of his friend's marriage. In the caption, which was originally in Hindi, Aly wrote, “No one knows better than me how happy you must be on this day. We've spent nights after nights talking and star-gazing and you would wonder when you would get to marry Disha. Finally, the day is coming. I am so happy for you, my dear.” He sprinkled red heart emojis throughout the message and ended the heartwarming note with a word of prayer, “Allah khush rakhe yeh dua hai meri”, and blessing upon the couple.

Disha couldn't stop herself from commenting on such a lovely post. She wrote, “This is so sweet” and ended the note with a puppy-eyes emoji and a red heart emoji. Jasmin said, “super excited”. Fans, too, were excited at the news. However, a few of them, who found couple goals in Aly and Jasmin, couldn't help asking the partners about their future plans.

Here's the wedding announcement that Rahul and Disha posted on their Instagram accounts earlier. They captioned it as the “DisHul Wedding”, which is to take place on July 16 this year.

Now, we all save the date and expectantly wait to see the event, which is, for sure, going to be a massive celebration of love and friendship.