Allu Arjun Is Holidaying With His Family In London. Wife Sneha Reddy Shares A Glimpse

Allu Arjun was last seen in Pushpa: The Rise 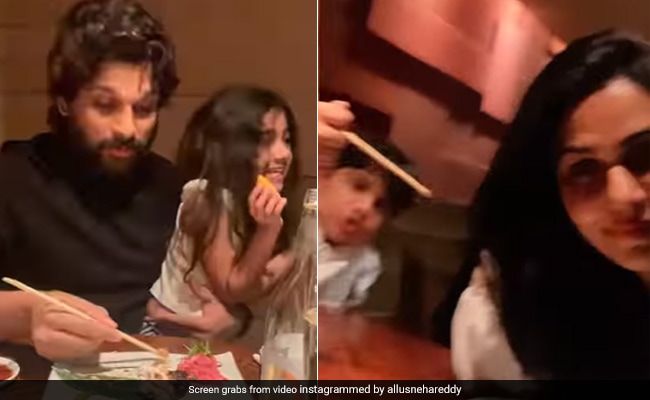 Allu Arjun is currently on a vacation with his family in London. On Thursday, the actor's wife, Sneha Reddy, shared a video, giving his fans a glimpse of their amazing holiday. The video features Allu Arjun, his wife Sneha Reddy and their kids - Ayaan and Arha. In the video, Allu Arjun and his family can be seen enjoying a meal together, where Allu Arjun can be seen feeding his adorable daughter Arha, while his son Ayaan can be seen playing with chopsticks. In the next few frames, Allu Arjun can be seen walking on the streets of London with his son, bowling and visiting other tourist places in London. Sharing the video, Sneha Reddy added the following hashtags as her caption - London, Vacation, Family, Take Me Back and Travel with Allu Sneha Reddy among others.

Check out her video here:

The makers of the film have already started the pre-production of its sequel, Pushpa: The Rule, which will show the continuation of the first part.

Before Pushpa: The Rise, Allu Arjun was seen in Trivikram's 2020 film Ala Vaikunthapurramuloo, also starring Pooja Hegde and Tabu among others. The film is currently being remade in Hindi, starring Kartik Aaryan in the lead role. The film titled Shehzada is being directed by Varun Dhawan's brother Rohit Dhawan.