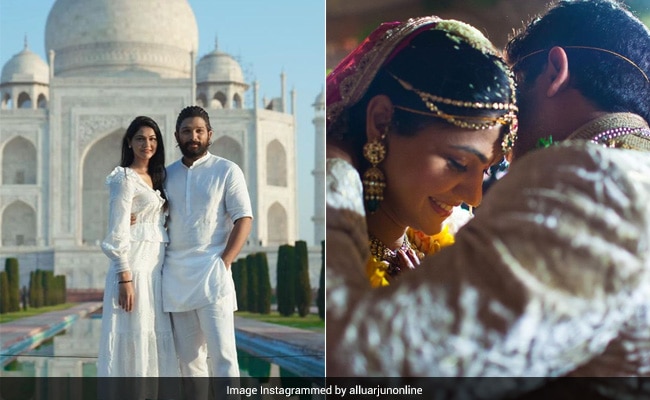 Telugu actor Allu Arjun is celebrating his 10th wedding anniversary with wife Sneha Reddy today. On the occasion, the actor posted multiple pictures with Sneha on Instagram and wished his "cutie" a happy wedding anniversary. In the first photo, the couple can be seen posing together in front of the Taj Mahal. The second picture is a throwback from 2011, which happens to be from Allu Arjun and Sneha's wedding festivities. The Son Of Satyamurthy actor wrote an oh-so-adorable note along with the pictures, while celebrating their "wonderful journey of ten years."

"Happy 10th Anniversary to us Cutie. What a wonderful journey of ten years ... and many more to come," Allu wrote in his caption.

Allu Arjun posted a few more pictures to celebrate their togetherness on the occasion. See them here:

Allu Arjun married Sneha Reddy in 2011 in Hyderabad. The couple have two children - a son and a daughter named, Allu Ayaan and Allu Arha respectively.

In terms of work, Allu made his debut in Telugu film Gangotri in 2003. The actor has worked in films such as Arya, Bunny, Happy and Desamuduru, Son Of Satyamurthy and Sarrainodu. Allu is now gearing up for his upcoming film Pushpa which will release this year.