All The Pics From Nayanthara And Vignesh Shivan's Wedding Album 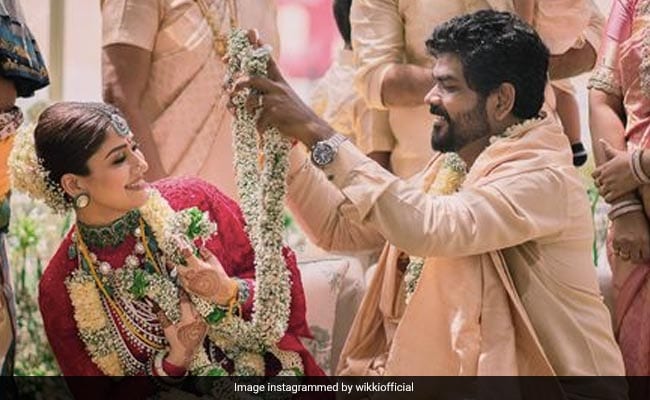 Nayanthara and Vignesh Shivan at their wedding. (courtesy: wikkiofficial)

Nayanthara and Vignesh Shivan found love on a film set, where she was the actor and he was directing the project in 2015. On Thursday, the couple got married in Chennai in an intimate ceremony. The filmmaker has been actively sharing stunning shots from his and Nayanthara's wedding album. Vignesh Shivan announced the news of his and Nayanthara's wedding on social media with these words: "On a scale of 10... She's Nayan and am the one. By God's grace. Just married Nayanthara." He then shared pictures from the jaimala ceremony on Instagram and wrote: "Am married. Just the beginning of a bigger, stronger, crazy love story with you my Thangamey. Love you Thangamey. Kanmani Kadambari and now my wife."

The filmmaker then shared a solo shot of himself, dressed in his wedding ensemble designed by Jade and wrote: "Blessed. Thanking the universe and our parents."

He then shared a stunning picture of the bride and he wrote this for Nayanthara: "From Nayan mam ... to Kadambari ... to #Thangamey to my baby and then my Uyir. And also my Kanmani and now my wife." He added the hashtags #WikkiNayanWedding and #WikkiNayan to his post.

Stunning is the word. Take a look:

Ahead of the wedding, Vignesh Shivan shared a mushy post for Nayanthara. An excerpt from his post read: "No, it's all dedicated to the love of my life Nayanthara. My Thangamey! Excited to see you walking up the aisle in a few hours. Praying God for all the goodness and looking forward to starting a new chapter officially in front of our beloved family and the best of friends."