Alia Bhatt will make her Hollywood debut with Heart of Stone 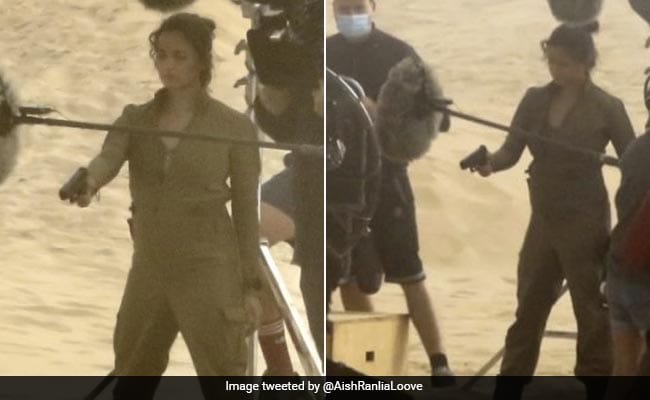 Several pictures of Alia Bhatt are doing rounds on the internet from the sets of her Hollywood debut Heart of Stone. Alia Bhatt, who recently announced the schedule wrap of the movie, can be seen in an olive green jumpsuit in a desert-like setting. In the viral images, it seems like she is filming a scene as she is seen brandishing a gun. In some of the pictures, her co-star Gal Gadot can also be seen in a white tank top and black pants. Soon after the images went viral, her fans were quick to spot Alia Bhatt's baby bump. A few days ago, the actress surprised her fans by announcing that she's expecting her first baby with her husband, Ranbir Kapoor.

Here have a look at viral images:

pregnant alia working hard and doing actions scenes in a very sunny portugal ???????? we proudly stan a queen like her#aliabhattpic.twitter.com/jsPNSrwt52

Announcing the schedule wrap, Alia Bhatt posted a set of pictures, including co-star Gal Gadot. Along with the images, she wrote a sweet note that reads, "Heart of Stone - you have my wholeeeeeee heart Thank you to the beautiful @gal_gadot .. my director Tom Harper ... @jamiedornan missed you today .. and WHOLE team for the unforgettable experience. I will be forever grateful for the love and care I received and I can't wait for you all to see the film!!!!! But for now ..I'm coming home babyyyyyy". Soon after she shared the post, Gal Gadot commented, "We miss you already," followed by a heart emoticon. Jamie Dornan, who's missing from the pictures, wrote, "@aliaabhatt !!! Sorry I wasn't there for your last day. Had sooo much fun working with you! Good luck with (baby emoticon)! And see you for promotion!".

Alia Bhatt and Ranbir Kapoor got married on April 14 this year in an intimate ceremony at their house in Bandra. A week ago, Alia announced the pregnancy news on her Instagram handle, leaving her fans excited. Posting an adorable picture, she wrote, "Our baby ..... coming soon". Check out the post below:

Meanwhile, on the work front, Alia Bhatt has Darlings and Rocky Aur Rani Ki Prem Kahani in her kitty.