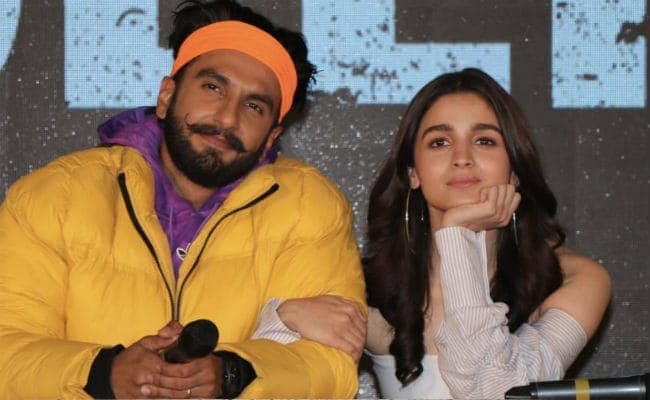 A throwback of Alia Bhatt and Ranveer Singh from Gully Boy trailer launch.

Alia Bhatt, who stars in Darlings and has also backed the film along with Shah Rukh Khan, interacted with the media at the film's trailer launch on Monday. During the event, the actress was asked to share her thoughts about her Rocky Aur Rani Ki Prem Kahani co-star Ranveer Singh posing nude for a magazine and being trolled for it. Alia Bhatt's reply was:"I don't like anything negative said about my favourite Ranveer Singh. Toh main yeh question ko bardasht bhi nahi kar sakti hu (so the question itself is something I can't tolerate." The actress added, "I love him, he's eternally favourite to every one of us actually and he has given us so much in the movies. We should only give him love."

Here's the video from the Darlings trailer launch:

On the professional front, Alia Bhatt recently wrapped the shoot of Heart Of Stone, co-starring Gal Gadot and Jamie Dornan, which marks her Hollywood debut. She awaits the release ofDarlings, which marks her debut as a producer. She will also be seen in Karan Johar's Rocky Aur Rani Ki Prem Kahani and Farhan Akhtar's Jee Le Zaraa.

In terms of work, Ranveer Singh was last seen in Yash Raj Films' Jayeshbhai Jordaar. Before that he featured in Kabir Khan's '83. Last year, the actor also had a cameo appearance in Rohit Shetty's cop drama Sooryavanshi, starring Akshay Kumar in the lead role. The actor also signed another project with Rohit Shetty, which is titled Cirkus. The film is an adaptation of Shakespeare's The Comedy Of Errors.