Alia Bhatt Likes This Picture Of Ranbir Kapoor With Mom Neetu And Ayan Mukerji. Do You? 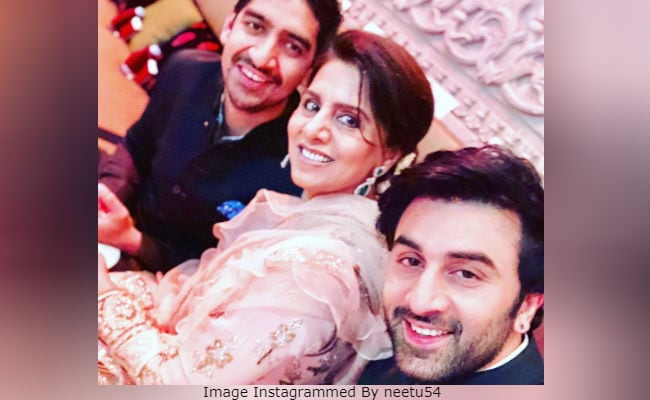 Alia Bhatt and Ranbir Kapoor are always found on the trends list and it appears that the Internet carefully tracks the actress' social media activities. This time, Alia Bhatt hasn't posted anything but it's a picture of Ranbir Kapoor because of which the rumoured couple is trending. Ranbir's mom Neetu Kapoor shared a picture of with the actor and Ayan Mukerji, which Alia has liked. "With my two sons," she captioned the post, adding two heart emoticons. The picture has been taken during Akash Ambani and Shloka Mehta's engagement party in Mumbai, where Neetu Kapoor was accompanied by her 'two sons.' Alia had also attended the party.

Instagram exchanges between Alia and Neetu Kapoor happen quite often. Ms Kapoor's comment is often found on Alia's posts and recently, she okayed a picture of her, where the actress shared her look for Akash and Shloka's pre-engagement party. Neetu Kapoor had reviewed a look of Alia during Raazi promotions as 'gorgeous.'

Alia Bhatt and Ranbir Kapoor's dating rumours featured in headlines after the duo made a couple's entry at Sonam Kapoor and Anand Ahuja's wedding reception party in May. After which, Alia had also shared a picture with Ranbir, which had sent the Internet into a meltdown.

Some weekends ago, Alia Bhatt dined with Ranbir, Neetu Kapoor, his sister Riddhima and niece Samara. And, before Sanju's release, she was spotted at Rishi and Neetu Kapoor's home for a small get-together.

Alia and Ranbir are together making Brahmastra, directed by Ayan Mukerji. The film also stars Amitabh Bachchan. Meanwhile, Ranbir's Sanju hit the screens on Friday and is likely to make score a century at the box office over the weekend.
Comments
Alia BhattRanbir KapoorAlia ranbir