"We learn the way, on the way - we also must take some pictures while we do so," wrote the actress 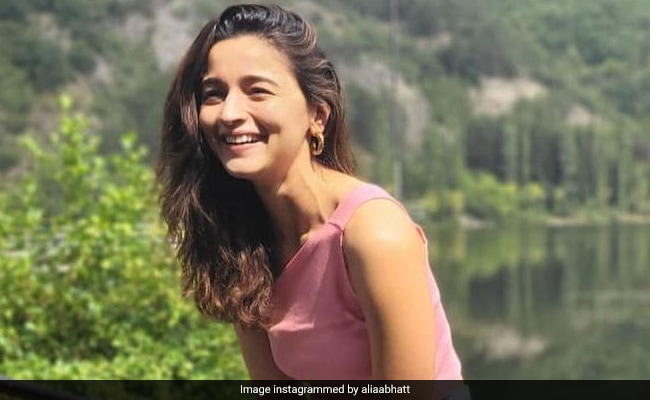 As per Alia Bhatt, it doesn't hurt to click some good pictures while we are "learning the way, on the way" and we totally agree with her. The actress, on Monday, lit up Instagram by sharing some beautiful and adorable pictures of herself from a breathtaking location. Alia Bhatt looks pretty in a peach crop top and blue jeans. She can be seen smiling and laughing with all her heart in the photos, sharing which she wrote: "We learn the way, on the way - we also must take some pictures while we do so." Reacting to her daughter's post, actress Soni Razdan commented: "Couldn't agree more" and dropped a red heart icon.

Alia Bhatt and sister Shaheen are the daughters of Soni Razdan and filmmaker Mahesh Bhatt. Mahesh was earlier married to Kiran Bhatt, with whom he has daughter Pooja Bhatt and son Rahul Bhatt. On Alia's post, sister Shaheen Bhatt and actor Ranveer Singh, with whom Alia has worked in Gully Boy, also dropped red heart emojis. See Alia Bhatt's post, in which she shines bright like the sun, here:

Alia Bhatt is currently busy prepping Rocky Aur Rani Ki Prem Kahani, in which she co-stars with Ranveer Singh. The film is being directed by Karan Johar. Earlier this month, Alia shared a video collage featuring Ranveer, Karan Johar and others from the first day of Rocky Aur Rani Ki Prem Kahani shoot and wrote: "Too many feels to fit in a caption. #RockyAurRaniKiPremKahani #RRKPK."

Alia Bhatt was last seen in her father's project Sadak 2. She co-starred with Sanjay Dutt and Aditya Roy Kapur in the film. Alia has many films lined up. She will next be seen in Ayan Mukerji's Brahmastra with boyfriend Ranbir Kapoor, Amitabh Bachchan and Nagarjuna Akkineni, in Sanjay Leela Bhansali's Gangubai Kathiawadi and in her own production debut titled Darlings.