"You laugh best with who you've cried most!" wrote Pooja Bhatt 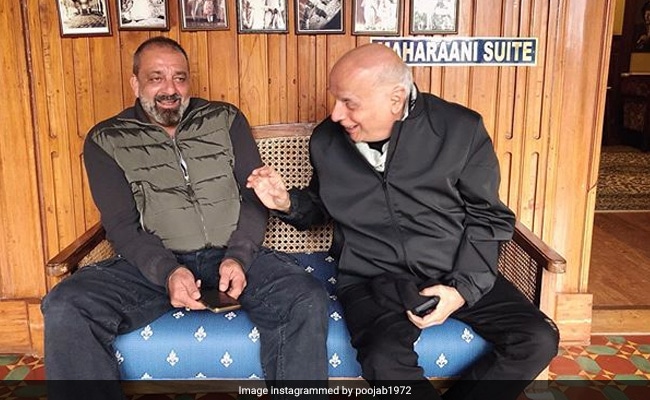 Alia Bhatt, who is filming Sadak 2 with her filmmaker father Mahesh Bhatt and sister Pooja Bhatt in Ooty, shared a picture from the sets of the film on Wednesday. The photo features Mahesh Bhatt sitting in a car holding shooting gear. Adding the picture to the "Sadak 2 diaries," Alia Bhatt captioned it: "It's moments like these." Pooja Bhatt also raised the excitement level among the film's fans by adding a couple of photos of Sanjay Dutt with Mahesh Bhatt from the sets to the "Sadak 2 diaries." In the pictures, Sanjay Dutt can be seen having a hearty laugh with Mahesh Bhatt. Pooja accompanied her post with a heartwarming caption: "You laugh best with who you've cried most!"

Alia Bhatt frequently delights her fans by sharing several pictures from the film's sets on social media. Earlier this month, she posted a picture of herself chilling with her "big sister" in Mysore and wrote: "Priceless moments with the big sister."

Here's a look at her other picture from the "Sadak 2 diaries":

Today is Day 1 of Sadak 2. And that's my father, now also my director, holding the clap. I begin shoot in a few days and honestly, I'm petrified. I feel like a tiny mouse trying to climb a beautiful, immense, emotional mountain. I hope I make it to the top and if I fall I hope I'm able to get up again. It's a tough climb but from everything I've seen and everything I've heard, I know every single step and misstep will be worth it! Here's to movies, family, dreams and starting out on a brand NEW journey! And what a journey it's going to be!!!!

Earlier, speaking at the Jio MAMI Movie Mela, Alia Bhatt recalled an incident, when Mahesh Bhatt broke down on the sets after watching her cry in a scene. She said: "I was doing an emotional scene and I didn't plan to cry but I just started crying. He started crying while I was and I felt him cry and I broke out of the moment for a second and was like, 'That's my Dad crying, I can't see him cry' and I started crying even more," reported news agency PTI.

At the same event, Alia said that her biggest takeaway from the film is the fact that it gave her time to bond with her father. "The joy that I had to be connected with my father, to work with him, he's like a new born baby on set. It's just amazing," she was quoted as saying by PTI.

Sadak 2 is slated to open in theatres in July next year.