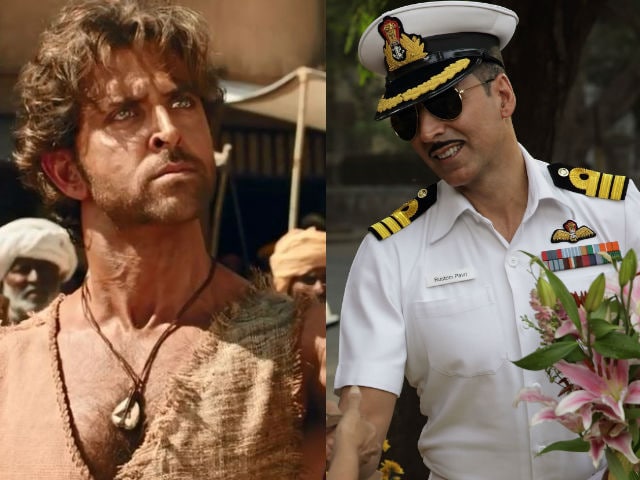 Hrithik (L) in a still from Mohenjo Daro. Akshay (R) in Rustom.

The Khiladi actor, however, emerged as the winner as Rustom has earned over Rs 49 crore in the country. On being asked whether the same releasing date has changed the equation between the two stars, Akshay said, "We are still neighbours. We are still friends (and) we still talk to each other and eat together."

On being asked if Hrithik congratulated him, Akshay said, "No he hasn't till now."

The Baby actor said "clash" was not the right word to use when two films release on the same day.

"It is not a clash. Do not give it a word clash. Clash is a wrong word (and) we do not clash with each other. We always pray that movies should run at the box office, if the films do well, actors will also do well and eventually the film industry will run," Akshay said. According to the 48-year-old actor, it is important that every film does well commercially. "We want to make films like in Hollywood. They make big action films and we would also like to do it. And that can only happen if all films work," he said.

Besides acting in mainstream films, Akshay has also earned rave reviews for his roles in real life dramas like Special 26, Baby, Airlift and Rustom.

"I am happy that people enjoy these kinds of films. It gives a boost to other filmmakers to make (films on) real life incidents. It is nice," he added.

"It was very good that my colleagues and others with whom I have not worked also came ahead (to promote Rustom). I am very thankful to them for supporting my film. They (actors) also tweeted about my film. It does work well," he said.

Akshay said his wife Twinkle Khanna and his mother-in-law did see Rustom and liked the movie.

"I think this trend (of actors promoting films of their colleagues) should continue and we should do it with other films. I feel everybody's film should run. It is important for the film industry," he added.