Akshay Kumar's Sooryavanshi And Ranveer Singh's '83 Will Release In Cinemas 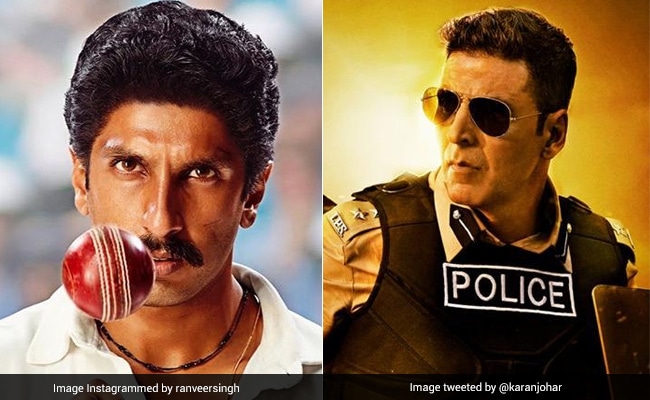 Akshay Kumar fans are thrilled to discover that, as rumoured, his upcoming action film Sooryavanshi will release in cinemas instead of on an OTT platform. Sooryavanshi, directed by Rohit Shetty, has been scheduled for this Diwali, reports trade analyst Taran Adarsh. In addition, sports film '83, starring Ranveer Singh as former skipper Kapil Dev, will also release in theatres and has been scheduled for Christmas. Both films were to release earlier this year - March and April - and were postponed because of the coronavirus lockdown. Twitter has been trending #Sooryavanshi all morning, relieved by the prospect of watching Rohit Shetty's storied celluloid pyrotechnics on the big screen.

Just yesterday, another Akshay Kumar film was announced as one of seven movies to release on the streaming platform Disney+Hotstar. Laxmmi Bomb, in which Akshay plays a transgender character, will be joined by Sushant Singh Rajput's last film Dil Bechara, Ajay Devgn's Bhuj, Alia Bhatt's Sadak 2, Abhishek Bachchan's The Big Bull, Vidyut Jammwal's Khuda Hafiz, and Kunal Kemmu's Lootcase. Dil Bechara will be the first of these films to stream, on July 24.

The coronavirus pandemic and consequent lockdown has forced several films out of cinemas and online. Gulabo Sitabo, starring Amitabh Bachchan and Ayushmann Khurrana, released on Amazon Prime Video this month. Other films going straight to streaming include Janhvi Kapoor's Gunjan Saxena: The Kargil Girl and the Shakuntala Devi biopic with Vidya Balan in the lead.