Akshay Kumar's Gold To Release On Scheduled Date. Also, No Clash With 2.0

Akshay Kumar will be seen playing a hockey coach in Gold 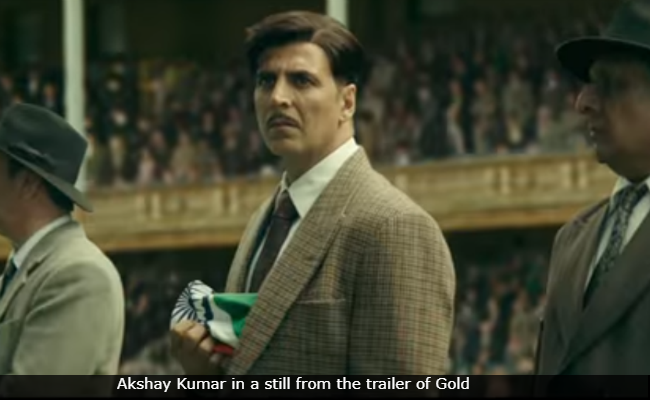 Akshay Kumar in a still from Gold. (Image courtesy:

New Delhi: Akshay Kumar's upcoming film Gold will be releasing on its scheduled date. Earlier, there were rumours that the release date of the film will be postponed in order to avoid clash with Rajinikanth's 2.0, which also features Akshay Kumar as the antagonist. However, a source put an end to the rumours and told Times Of India: "Team Gold is all geared up to release their film during the Independence Day weekend. The shooting of the film has been wrapped smoothly as per schedule. In fact, the post production of the film is on in full swing, the makers are all set to present something exciting this week."

Gold is a period drama, set against the backdrop of the 1948 Summer Olympics and traces the incidents of India winning its first gold medal in hockey. Other than Akshay Kumar, who plays the role of a hockey coach, the film also features Mouni Roy, Kunal Kapoor, Amit Sadh, Vineet Kumar Singh and Sunny Kaushal. The film has been extensively shot in Yorkshire and the Midlands in England.

Take a look at the film's teaser here.


Promoted
Listen to the latest songs, only on JioSaavn.com
Directed by Reema Kagti and produced by Farhan Akhtar and Ritesh Sidhwani's Excel Entertainment, Gold will hit the screens on August 15.

Meanwhile, Akshay Kumar's Toilet: Ek Prem Katha, which released as Toilet Hero in China, is performing well at the box office and has collected Rs 39 crore within two days. Apart from Gold and 2.0, Akshay has Kesari and Housefull 4 in the pipeline. He was last seen in PadMan.