The actor shared a picture featuring himself and Aanand L Rai on Twitter. 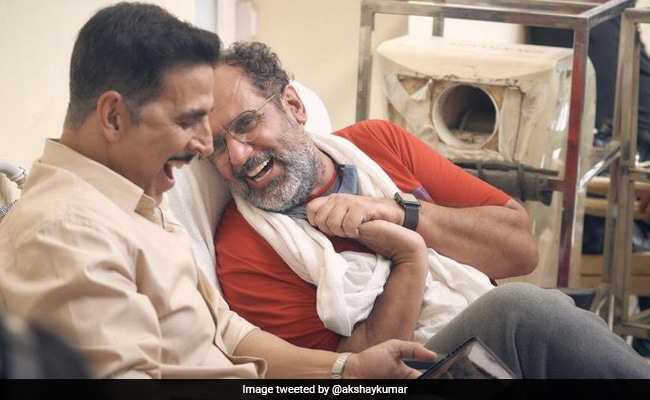 Akshay Kumar may be wrapping up his shoot with the Rakhsha Bandhan team but he has memories to cherish from the sets of the film. The actor left a happy photo with director Aanand L Rai on Twitter. He raised a toast to the good times and good laughs that they shared during the shoot. Akshay Kumar tweeted, "Here is to all I and Aanand L Rai did throughout the shoot of Raksha Bandhan - laugh like there's no tomorrow." Then, Akshay Kumar added on a sadder note, "Ironically, as we wrapped the film last night, there was a bittersweet tinge of sadness. Off to the next. New day, new roller coaster."

Here's to all I and @aanandlrai did throughout the shoot of #RakshaBandhan - laugh like there's no tomorrow! Ironically, as we wrapped the film last night, there was a bittersweet tinge of sadness. Off to the next. New day, new roller coaster. pic.twitter.com/KIPO7whup4

Akshay Kumar's fans reacted to the post in a major way. One fan wrote, "Back to back wrapped up. First, Production 41 and now Raksha Bandhan. Apna Akki bullet train se bhi jyada tez hai [Our Akki is faster than a bullet train]."

Many tweeted that they were impatiently waiting for Akshay Kumar's Sooryavanshi. One user wrote, "Sir, when is Sooryavanshi mania starting. We can't wait for Sooryavanshi in cinemas."

Sir When Is #Sooryavanshi Mania Starting ????

We Can't Wait For Sooryavanshi In Cinemas

Another posted a photo of Akshay Kumar from Sooryavanshi and wrote about its release date.

This user asked about Akshay Kumar's upcoming projects and wished him luck.

Akshay Kumar had announced the release date of his much-awaited cop-drama Sooryavanshivia a social media post.

Akshay Kumar latest release Bell Bottom has been fetching a lot of attention. Some behind the scene stories have also emerged. Recently, a fight scene practice between Akshay Kumar and Huma Qureshi surfaced from the set of Bell Bottom.  While Akshay Kumar praised the actress for getting it right in a snap, Huma wrote, "What fun it was to get beaten up by Akshay Kumar." Watch the clip here:

Akshay Kumar will also appear in Atrangi Re and OMG – Oh My God! 2.