Akshay Kumar, Twinkle Khanna Are Almost Done With Their Holiday 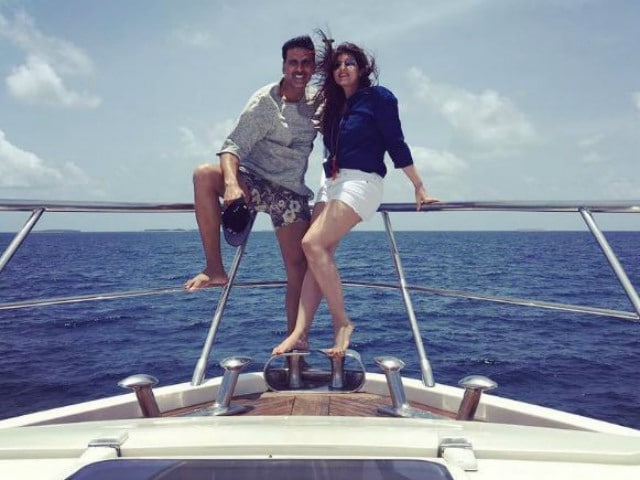 New Delhi: Star couple Akshay Kumar and Twinkle Khanna are treating themselves to a family vacation in Cape Town and are almost at the end of what looks like a dream holiday. Akshay posted a photo of their 'last day in paradise' - that was yesterday - which is now trending.

Akshay and Twinkle have been accompanied by their children - 14-year-old son Aarav and 3-year-old daughter Nitara.

All good things must come to an end (we don't know why but apparently they must). Here's the wrap photo of the Kumars' fam-jam.

The smiles are infectious.

You know you're having a good time when you don't realise how days have passed. Last day in paradise...making the most of it pic.twitter.com/MkYIYYg2kh

Twinkle, who also shared Akshay's post, wrote: "Last day in paradise and leaving with hearts and stomachs both filled to the brim."

Akshay and Twinkle will presumably begin the journey home today.

That feeling when you realise your little boy is not that little anymore...almost my height and borrows my shoes #goodfeeling#bondingtimepic.twitter.com/k3WifW3gfS

Enjoy every sunset, look forward to every sunrise #viewfrommywindow#gratefulpic.twitter.com/BDZIoMqoqq

As the sun begins its journey to light up my day in a distant land pic.twitter.com/BHMFGYHByV

The Music Room-Even a tone deaf individual like me was enthralled with the majesty surrounding our ragas #NamitaDevidayal#mustreadpic.twitter.com/zcWSqMOfBW

Away from the hustle bustle...in a place I never get tired of. Cape Town, thank you for always being a welcoming sight! #getaway#famjampic.twitter.com/33emEpIhOX

Earlier this year, Akshay shared this adorable family picture from their Maldives getaway, where his birthday week was celebrated:

Soaking in all the goodness of the sun & the sea,one last stroll before we bid goodbye.Maldives you will be missed! pic.twitter.com/1iMpnjVJq3

Sunshine, perfect breeze and beach bumming with my princess = a perfect birthday #feelingloved#grateful#happymanpic.twitter.com/ZoAo3pIDQK

Between the devil and the deep blue sea ,I am happy to pick this particular handsome devil #HappyBirthdayMrK#BigDaypic.twitter.com/DUGqNB7QLN

Promoted
Listen to the latest songs, only on JioSaavn.com
Akshay Kumar, 49, has finished shooting courtroom dramaJolly LLB 2 and is busy with thriller 2.0, co-starring Rajinikanth. Akshay's upcoming films also include Naam Shabana and Gold. Akshay, who was last seen in Rustom, made special appearances in Dishoom and Akira.

After flying home, Twinkle Khanna will begin prepping for the launch of her second book.