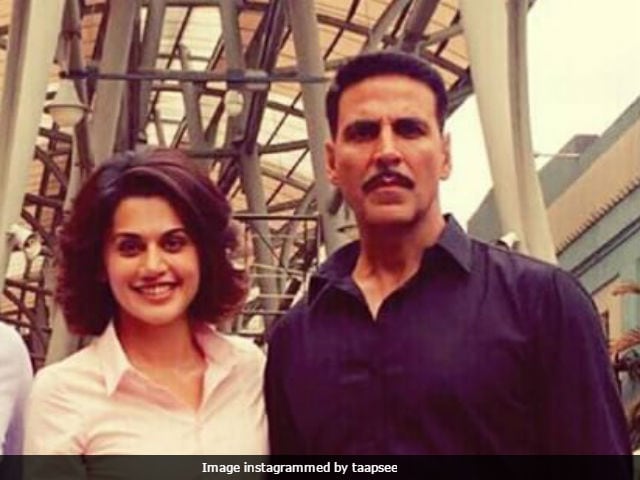 Taapsee and Akshay on the sets of Naam Shabana (Image courtesy: taapsee )

New Delhi: Akshay Kumar and Taapsee Pannu, who are currently shooting for their upcoming film Naam Shabana, recently shared a video on Twitter for women. In the video, the 29-year-old actress has urged women to take action against molesters. She speaks about how women freeze and become helpless when someone misbehaves with them. The Pink actress showed simple techniques that could help women during unsafe situations. Akshay Kumar, who also makes an appearance in the clip, shared it on his Twitter page with the caption: "Don't just freeze...ACT & REACT coz ur biggest weapon is with YOU! Watch, learn & show your move with #KohniMaar! Kya pata kab kaam aa jaye."

Naam Shabana is a prequel to the 2015 movie Baby in which Taapsee Pannu will be seen reprising her role as Shabana. The film is being directed by Shivam Nair and co-produced by Neeraj Pandey and Shital Bhatia under Friday Flimworks banner. The movie is scheduled for release on March 31.

Promoted
Listen to the latest songs, only on JioSaavn.com
Taapsee Pannu was last seen in Shoojit Sircar's Running Shaadi along with Amit Sadh and The Ghazi Attackco-starring Rana Daggubati, Kay Kay Menon and Atul Kulkarni. After Naam Shabana, the actress will feature in Tadka, directed by actor Prakash Raj. The film also stars Nana Patekar, Shriya Saran and Ali Fazal.

Meanwhile, Akshay Kumar, who was last seen in Jolly LLB 2 along with Huma Qureshi, Saurabh Shukla and Annu Kapoor, will next be seen in films such as - Toilet - Ek Prem Katha, 2.0 and Padman.