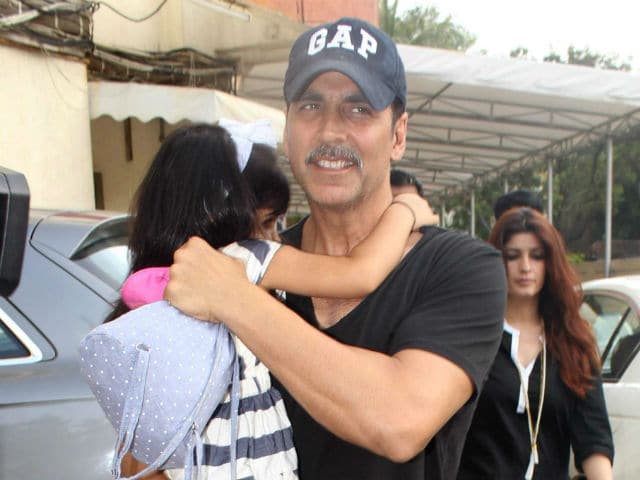 Akshay Kumar photographed with his daughter Nitara in Mumbai.

New Delhi: Akshay Kumar is spending his birthday is the best way possible - on holiday with his family. The actor is 49 today and while he neglected to tell us exactly where he's celebrating his penultimate year in the 40s, he did post this wonderful picture of himself and three-year-old daughter Nitara (whose face is carefully not shown, as ever).

Blue sky, blue sea and as Akshay puts it, his "princess." Not pictured are wife Twinkle and son Aarav. Happy birthday, Akshay Kumar.

Twinkle shared another picture from the boat and wished 'Mr K.' Not pictured is their son Aarav.

Between the devil and the deep blue sea , I am happy to pick this particular handsome devil #HappyBirthdayMrK #BigDay

Back home in Mumbai, Twitter was flooded with birthday wishes for the actor, many of which he responded to.

Chief among the wishes was one from Amitabh Bachchan, Akshay's co-star from films like Aankhen and Waqt.

Need to give you updated photos, said Akshay in his response:

Thank you so much Sir...need to meet you soon for newer pictures and a great time https://t.co/WEYZCQtq8f

Happy birthday @akshaykumar have an even greater year than you're having, if that is possible. Big love sundi.

Happy birthday to a solid man with a solid heart!!! #HappyBirthdayAkshayKumar

Promoted
Listen to the latest songs, only on JioSaavn.com
Akshay Kumar was last seen in Rustom, a screen adaptation of the real-life Nanavati case. He also starred in Airlift and Housefull 3 and made a special appearance in Dishoom and Akira. Akshay is currently filming Jolly LLB 2 and 2.0, the sequel to Rajinikanth's Enthiran.

Meanwhile, September is a month of birthdays for the Kumar family - both Aarav and Nitara have their big days coming up.