"Happy to see these five girls, who are very big in their own way, are not bothered that there are five of them coming together," said Akshay Kumar 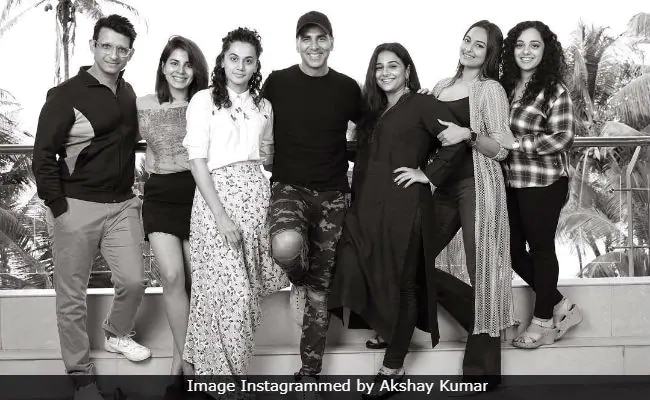 Akshay Kumar with the cast of Mission Mangal (courtesy akshaykumar)

The cast of Akshay Kumar's Mission Mangal also includes actresses Sonakshi Sinha, Taapsee Pannu, Vidya Balan, Kirti Kulhari and Nithya Menen and actor Sharman Joshi. Talking about the five-actress cast, which is rarely seen in Bollywood, Akshay recently said at in an interview that while the Mission Mangal actresses had no qualms about sharing screen space with each other, the same can't be said about the male stars of Bollywood, reported news agency PTI. "The attitude of 'why should I do it?' isn't there. I don't think five heroes will come together. I don't think so," PTI quoted Akshay Kumar as saying.

In his interview, the 51-year-old actor also added that the Vidya, Sonakshi, Taapsee, Kirti and Nithya came on board Mission Mangal because they liked the respective roles offered to them. "But when I approached them, they were very happy with their roles and were ready to do the film," PTI quoted Akshay Kumar as saying.

In his interview, Akshay added that the actresses were approached as the script of Mission Mangal, which is based on India's Mars Orbiter Mission or MOM, demanded such a cast. "The script of Mission Mangal demands them to be ahead. They are the real heroes. I am supposed to be behind them even though I am producing it. I am very happy to see these five girls, who are very big in their own way, are not bothered that there are five of them coming together," PTI quoted Akshay as saying.

Akshay also revealed that he really looks forward to multiple-hero movies in Bollywood and said: "I hope seven actors come together. Earlier they used to. Rajkumar Kohli used to make those films and even I've done Jaani Dushman," he added. Akshay Kumar co-starred with Sunny Deol, Sunil Shetty, Arshad Warsi, Aditya Pancholi and Raj Babbar in the 2002 movie.

Mission Mangalis being directed by Jagan Shakti. Akshay is co-producing Mission Mangal along with PadMan director R Balki. Mission Mangal is Akshay Kumar's first movie as part of his recently signed three-film deal with Fox Star Studios. In the past, Akshay has worked with Vidya Balan in Bhool Bhulaiyaa and co-starred with Sonakshi Sinha in films such as Holiday and Boss. Akshay also shared screen space with Taapsee Pannu in Naam Shabana.

Earlier this month, Akshay introduced the cast of Mission Mangal with a post, which he captioned: "Proud and excited to bring the story of India's Mars mission, Mission Mangal to you. Coincidentally the mission was launched on this very date, November 5, 2013. Meet the team and do share your best wishes for our shubh mangal journey. Shoot begins soon."

Akshay Kumar is currently awaiting the release of Rajinikanth's 2.0, in which he plays the antagonist. Akshay also has films such as period drama Kesari and comedy Housefull 4 in the line-up for release. Meanwhile, the shooting of Mission Mangal began last week.