Akshay Kumar Donates Rs 1.5 Crore To Build A Home For Transgenders In Chennai

In the upcoming film Laxmmi Bomb, Akshay Kumar plays the role of a transgender himself 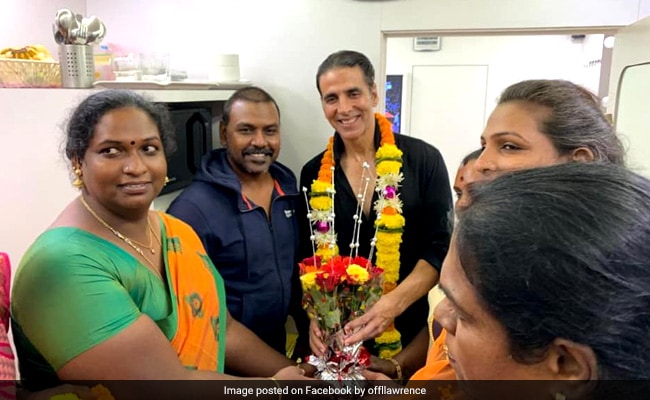 Akshay Kumar, who is currently busy with his forthcoming releases, took out time to support and uplift the transgender community in India. The actor recently donated Rs 1.5 crore to build a home for transgenders in Chennai. Raghava Lawrence, who is directing Akshay's upcoming film Laxmmi Bomb, shared the "good news" of the actor's new initiative with friends and fans along with some pictures on Facebook. On his post, the filmmaker wrote, "I would like to share one good news, Akshay kumar sir is donating Rs 1.5 crore for building transgender home for the first time in India." He added, "During Laxmmi Bomb shoot I was talking to Akshay Kumar sir about the trust projects and transgender's home, immediately after hearing this without even me asking he told he will donate Rs 1.5 cores for building transgender's home."

Raghava Lawrence heads a charitable trust named after him. On completing 15 years since its foundation, the filmmaker wanted to celebrate by "initiating a new project for uplifting transgenders by providing shelter for them."

On his recent post, he added, "I consider everyone who helps as God, so now Akshay Kumar sir is a God for us. I thank him for lending his huge support for this project. Our trust next vision is to uplift transgenders and provide shelter for them all over India with Akshay Kumar sir's support. I thank him in behalf of all transgenders. We will inform the bhoomi pooja date soon. I need all your blessing."

In the upcoming film Laxmmi Bomb, Akshay Kumar plays the role of a transgender himself. He plays a character, who is scared of ghosts but is eventually possessed by the spirit of a transgender. Laxmmi Bomb is a Hindi remake of 2011 Tamil horror comedy Muni 2: Kanchana, which was directed by Raghava Lawrence and also featured him as a protagonist in the film.

In an interview with HT, Raghava Lawrence was quoted as saying, "During the making of my film Kanchana, I had met transgenders, and listened to their painful stories, how they were suddenly orphaned, even when it's how God made them. They would have to sleep at railway stations, (and other such random places). That's when I thought about this shelter, for which I bought a land in my native place in Chennai, I was explaining it to Akshay sir one day, and he asked suddenly 'can I build this building?' I was shocked, because we were planning to go to big people and ask them (for help), even doing a show through which we could collect funds, but here was Akshay sir. These kind of people are God. The place is yet to be ready."

On the work front, Akshay Kumar has several films in the line-up including Sooryavanshi, Bell Bottom, Prithviraj, Bachchan Pandey, Atrangi Re and Baap Re Baap.