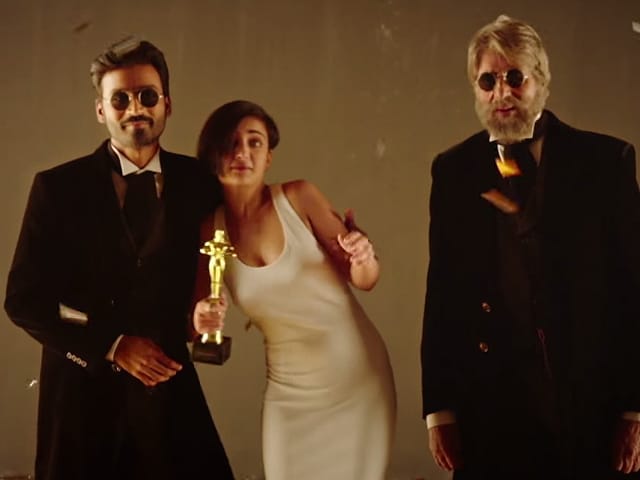 Akshara, Big B and Dhanush in a still from Shamitabh.

Mumbai: Debutante Akshara Haasan did not have any plans to turn actor but when the offer to star in Shamitabh came her way, she could not say no.

The 24-year-old actress, the younger daughter of Kamal Haasan and Sarika, worked as an assistant director for four years but never felt the need to shift to acting.

It was while working with an ad agency, she met R Balki (director) and felt she was ready to switch and become an actress.

"When Balki sir gave me the synopsis and read the script, I was very sure about it and the fact that I will do it. After the narration ended I realised I was in love with the script. When Balki sir asked for my decision I told him 'you know my answer' but he still gave me two days to think about it," Akshara said in an interview.

Shamitabh also stars Bollywood megastar Amitabh Bachchan and Tamil superstar Dhanush. Akshara said she was taken aback when she learned that she will share screen with Mr Bachchan in her debut film.

The newcomer said after signing the film she asked her mother, who was at that time working with the 72-year-old star in TV series, Yudh, if she could come and meet him on the sets.

"One day I went to the sets of Yudh. I was not sure how to greet him for the first time. Should I say namaste or should I touch his feet. My first interaction with him was cool and unforgettable," she said.

Akshara said that while shooting for the film, Mr Bachchan made her feel very comfortable and even praised her when she delivered a good performance.

"I was so happy because I did not expect to be praised by him. I was almost in tears. I was happy that he recognised my efforts. I remember on the very first day on the sets I was not sure how to handle the scene in his presence. I fumbled with my dialogues and then he was the one who came to me and helped me out," she said.

About her role, Akshara said her character is very quirky, who is in love with films and gets in between the egos of two artists, played by Big B and Dhanush.

Promoted
Listen to the latest songs, only on JioSaavn.com
The young actress said that her father is very proud of Shamitabh and is waiting to see her performance in the film.

Shamitabh will hit theatres on February 6.