AK Vs AK Trailer: Anil Kapoor And Anurag Kashyap's Rivalry Is As Real As It Gets. Surprise Cameo By Sonam Kapoor

Anil Kapoor, not quite happy with the original trailer, also shared his "real" version of the trailer 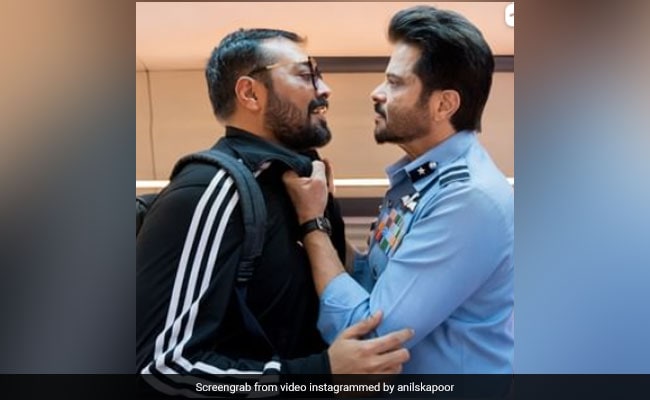 Anil Kapoor and Anurag Kashyap in a still from Ak vs Ak. (Image courtesy: anilskapoor )

Finally! The trailer of actor Anil Kapoor and filmmaker Anurag Kashyap's upcoming project AK vs AK is out now and their rivalry is as real as it can get in the 2-minute-long clip. And did we tell you, the trailer of the Vikramaditya Motwane-directed film, also has surprise cameos by Anil Kapoor's daughter Sonam and son Harshvardhan Kapoor? Well, Sonam has quite a significant role in AK vs AK. The trailer, shared by Anil Kapoor initially and also by Netflix, starts with the actor and the filmmaker, who can be seen mocking each other at a press event over factors like privilege and talent. A few minutes later, Anurag Kashyap can be seen pitching about a film shot in real time to Anil Kapoor. In the film, Anil Kapoor will have cross several hurdles to find his kidnapped daughter Sonam. Anurag added a twist also - according to the film's plot, Anil Kapoor cannot contact the police or taking anybody's help to find Sonam.

Anil Kapoor and Anurag Kashyap weren't quite happy with the initial trailer, made as per Vikramaditya Motwane's choice, and they promised to release their "real" versions of the trailer.

"AK vs AK. We are live from the press con from #AKvsAK. Keeping the best interest of the film in mind, I am releasing this trailer but this isn't what I had signed up for Vikramaditya Motwane and Netflix. It's okay for now. But I'll have my team release another one. The REAL trailer for Ak vs AK," wrote Anil Kapoor while sharing the trailer initially and later, while posting his version, he wrote: "No more fooling the audience please. As promised, the REAL narrative of #AKvsAK from the REAL AK." Take a look:

A day before the trailer of AK vs AK, Anil Kapoor and Anurag Kashyap teased their fans about their new film with ROFL war of tweets. We have picked a few for you guys here, take a look:

The closest you have come to an Oscar is watching Slumdog Millionaire win Oscars on TV. #TumseNaHoPayegahttps://t.co/sZzCDhVvAApic.twitter.com/YhZHKrEFfO

AK vs AK will release on Netflix on December 24.