Kapil Sharma's new show is titled Family Time With Kapil Sharma, the teaser of which was revealed last month 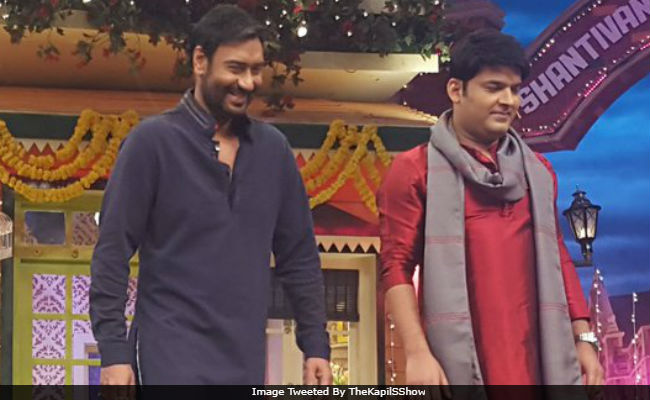 Ajay Devgn on the sets of The Kapil Sharma Show (Image courtesy: TheKapilSShow)

New Delhi: Actor Ajay Devgn might be one of the first guests to appear on Kapil Sharma's new show, reports Mumbai Mirror. The show is titled Family Time With Kapil Sharma, the teaser of which was revealed last month. According to Mumbai Mirror, Ajay Devgn recently shot a promo with the comedian and is 'expected to film' the episode in the coming week. "Ajay mocks him for keeping guests waiting for hours and for being out of work for a while but things end on a good note with him finally agreeing to come on the show," a source from the set told Mumbai Mirror.

Last year, Kapil Sharma, who previously hosted The Kapil Sharma Show, had cancelled the shoot with Ajay Devgn and team Baadshaho. Of the cancelled shoot, Ajay Devgn told news agency IANS, "We left because he hadn't reached. When I will talk to him next, I will get to know the reason." The cast of Baadshaho reportedly waited 15 minutes and then 'stormed out' when he didn't show up. Ajay Devgn had appeared on the show previously with wife Kajol to promote Shivaay.

Team The Kapil Sharma Show had also cancelled a few other film promotions as Kapil failed to appear. Like Ajay Devgn and his co-stars, Shah Rukh Khan and Anil and Arjun Kapoor had to leave the show without shooting.

Promoted
Listen to the latest songs, only on JioSaavn.com
Kapil's embattled show The Kapil Sharma Show ended months ago. He allegedly had a fight with co-star Sunil Grover, who later quit the show. Later, there were several reshuffling in the team, as some other co-stars also decided to quit. But due to Kapil's ill health and dipping TRPs, the channel and Kapil Sharma mutually decided to take end The Kapil Sharma Show. He took a sabbatical (of sorts) to recuperate from his alleged alcohol addiction.

Family Time With Kapil Sharma will reportedly be launched by end of March.