The actress, on Wednesday, posted a photo of her mother Vrinda Rai and late father Krishnaraj Rai smiling for the camera 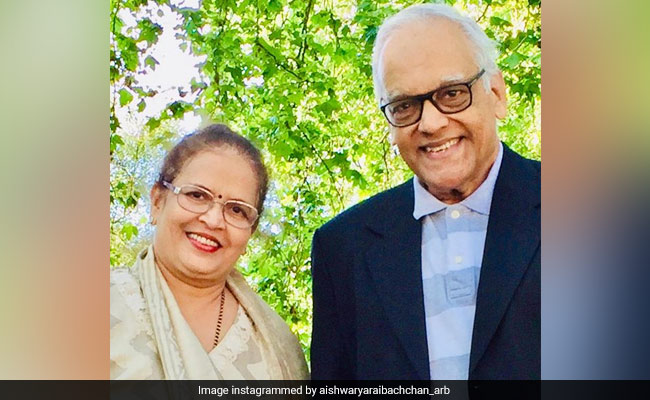 Aishwarya Rai Bachchan wished her parents on their 52nd wedding anniversary with all her heart on social media. The actress, on Wednesday, posted a photo of her mother Vrinda Rai and late father Krishnaraj Rai smiling for the camera and wrote a heartwarming note for them, including a wish on behalf of her daughter Aaradhya. Aishwarya Rai Bachchan wrote: "Happy anniversary dearest, darling mommy doddaaa - daddy ajjaaa... love you and thank you so much for all your unconditional love and blessings... always." The actress added a bunch of heart emojis to her note for her parents. Her father died in 2017.

Krishnaraj Rai died in March 2017 after a long battle with cancer. Last month, Aishwarya Rai Bachchan remembered her father on his birth anniversary with this post and a note that read: "Happy birthday my dearest darling daddy - ajjaa... love you eternally." Take a look:

Aishwarya Rai Bachchan has been making headlines for the past few days for her alleged connection with the Panama Papers leak case. She was questioned by the Enforcement Directorate (ED) in Delhi on Monday and she returned to Mumbai later in the evening.

In terms of work, Aishwarya Rai Bachchan was last seen in the 2018 musical film Fanney Khan, co-starring Anil Kapoor and Rajkummar Rao. Her next project is Mani Ratnam's upcoming movie Ponniyin Selvan. Aishwarya Rai Bachchan also has Anurag Kashyap's Gulab Jamun lined up. She will co-star with her husband Abhishek Bachchan in the film.