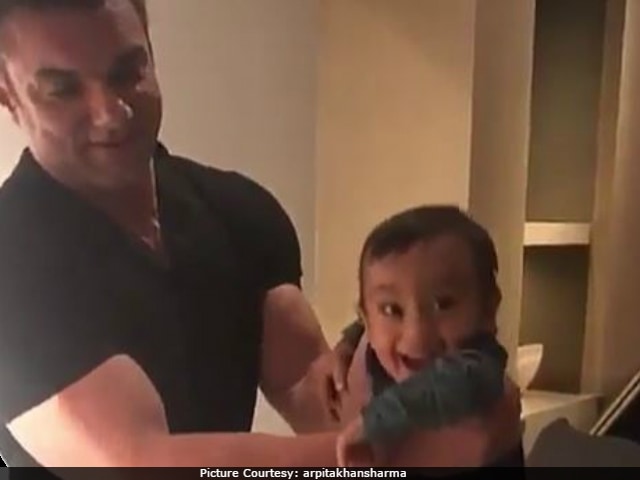 Sohail Khan and Ahil in a still from the video (courtesy: arpitakhansharma)

New Delhi: Actor Salman Khan often shares glimpses of adorable moments with his nephew Ahil, which will melt most hearts. Ahil also stars in Salman's sister Arpita Khan's generously shared Instagram posts and this time, for a change, it wasn't with the Dabangg actor Ahil featured with - it was with the youngest 'mamu' Sohail Khan. Arpita shared a playful video of his one-year-old son and brother Sohail, where the Krishna Cottage actor can be seen playing with Ahil on a piano. (P.S: You can't afford to miss Ahil's expressions in the image: "Mamu loving." The video was taken in Hong Kong, where Sohail and many other Khan family members went to support Salman's Dabangg world tour. Sohail is presently judging the kids reality show Chote Miyaan Dhaakad with actress Neha Dhupia and will next make an appearance in Salman's upcoming movie Tubelight.

Earlier, Arpita also shared some adorable moments with Salman Khan from Hong Kong, where the Dabangg world tour kick started. In a post the 51-year-old actor was seen carrying Ahil in a carrier. Salman and his Dabangg team had their second performance in Auckland on Saturday. Sonakshi Sinha, Bipasha Basu, Daisy Shah, Prabhudeva and Manish Paul are a part of Salman Khan's Dabangg tour. The next leg of the tour is scheduled to take place in Sydney and then in Melbourne. The actor is also awaiting the release of upcoming movie Tubelight, which is set to hit the theatres during Eid this year. Tubelight is directed by Kabir Khan.

Promoted
Listen to the latest songs, only on JioSaavn.com
Salman along with the whole Khan family went to Maldives to celebrate Ahil's first birthday last month. Arpita shared pictures from the birthday party while videos of the cake-cutting session have been shared on social media.

Meanwhile, Salman has also wrapped the shooting for Ali Abbas Zafar's Tiger Zinda Hai co-starring Katrina Kaif. The film, which is a sequel of Kabir Khan's 2012 movie Ek Tha Tiger, will see Salman reprise the role of Tiger, an spy. The film marks the Bodyguard actor's second collaboration with Ali Abbas Zafar. The duo have previously worked together in Sultan.