Ahem, Ahem! Malaika Arora Is Busy "Dreaming" Of The Ring In This Pic

Are you listening, Arjun Kapoor? 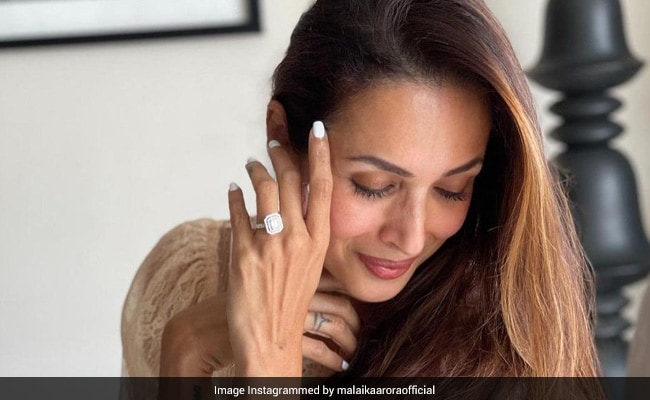 For once, we had to take away our eyes from Malaika Arora in her latest Instagram post as the big stone stole our attention. Calm down, the actress is not engaged. She just happened to share a set of pictures from a recent commercial she did for a jewelry brand and she can't stop dreaming about the ring in the pictures. Malaika wrote: "How dreamy is this ring, love, love, love it. Happiness starts here!" She added in her caption, "Checkout Ornaz if you're planning to pop the question for the love of your life, their engagement rings are absolutely gorgeous. You can get your ring customized too, isn't it amazing?"

Arjun Kapoor and Malaika Arora, who reportedly began dating in 2018, are frequently seen making appearances together. They often feature on each other's Instagram profiles. See some of their posts together:

Malaika Arora was previously married to actor-filmmaker Arbaaz Khan. They were married for 19 years, got divorced in 2017. The producer-actor is dating model Giorgia Andriani. Arbaaz and Malaika are parents to 18-year-old son named Arhaan.

Malaika Arora was seen as one of the judges on the TV reality show India's Best Dancer, alongside choreographers Geeta Kapoor and Terence Lewis. She is best-known for her dance performances to songs such as Chaiya Chaiya, Munni Badnaam Hui, Anarkali Disco Chali and Hello Hello among many others. Last year, she also featured as one of the judges on Supermodel Of The Year 2, alongside Milind Soman and Masaba Gupta.