Ahaan Review: It is easy to warm up to the actor because not only is there something overwhelmingly charming about him, he is also a man who clearly enjoys acting in front of the camera. 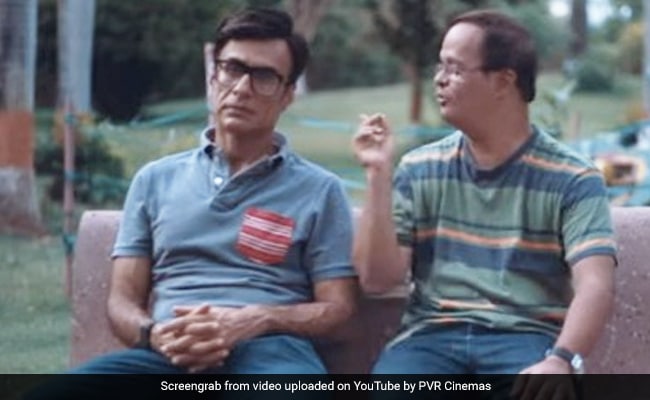 First-time director Nikhil Pherwani's Ahaan, streaming on Netflix, is a sweet little film that achieves much more than sweet little films are usually known to do. It tells the story of a free-spirited, fun-loving special needs youngster. But that isn't what sets it apart from other Indian movies that centre on characters with developmental disabilities.

Ahaan is different because it casts an actor with Down Syndrome in the role of the protagonist.

By keeping it all simple and steadfastly unpretentious, the director, who has also scripted and produced the film with his brother Abhishek Pherwani, allows the focus of the screenplay to stay squarely on the titular figure, a young man who, notwithstanding a genetic disorder, desires to lead a normal life, secure a job, marry, have children and build a home of his own.

Ahaan(Abuli Mamaji) is in his mid-20s. His mother Gayatri (Shilpa Mehta) makes brownies and cookies at home. Ahaan serves as a delivery boy. Ahaan is an instantly lovable guy. He makes friends with the greatest ease and never lets anything come in the way of savouring the little joys of life.

This is despite the fact that world around him isn't as hospitable as he would want it to be. The boys in his neighbourhood aren't too keen to let him play cricket with them. Not everybody he encounters warms up to him. His father Ranjit (Kaizaad Kotwal) is averse to the idea of Ahaan doing his own thing. It is his firm belief that the boy is vulnerable and in need of constant protection.

That is by no means the only major conflict in Ahaan's life. One of his neighbours, Ozzy (Arif Zakaria), a cleanliness freak, is a bundle of complications. He is a man with severe OCD. His neurotic fixation with not letting the smallest things around the house out of its ordained place drives a wedge between him and his wife Anu (Niharika Singh). The latter walks out on him after a fight and the man, a trader in shares, is left to nurse his wounds.

Ahaan, with whom Anu enjoys a special bond that has developed over time on account of her being a regular buyer of the goodies that Gayatri bakes, becomes the only hope that the haughty Ozzy has of worming his way back into his wife's heart. While one part of the tale focuses on Ozzy's sheepish, furtive attempts at marital rapprochement, another keeps the spotlight trained on Ahaan's struggles to rise above the limitations that his condition has imposed upon him.

"I am tired," Ahaan says on one occasion. "I've finished my life. I want a new life. Doosra janam." Reinvention is a tough call for him, especially given the refusal of his father to let him branch out on his and find his place under the sun.

Ahaan seeks solace in the company of people who are far more understanding. One such person is Onella (Plabita Borthakur), yet another of his mother's customers. Ahaan is particularly fond of the girl. She, too, has a special place in her heart for Ahaan and goes out of her way to be there when he needs her.

Ozzy, true to form, is insensitively blunt with Ahaan. You are an adult with the brain of a child, the older man says in one scene. Ahaan takes umbrage and walks away in a huff. Of course, Ozzy apologises soon enough. What his obnoxious behaviour does is emphasise the inability of 'normal' people to comprehend the needs and aspirations of individuals like Ahaan.

It is not that Ozzy is unaware of his own problems. He consults a shrink (Rajit Kapur), who puts him through an exposure therapy drill to help him rid himself of his avoidance of messy, dirty places. He is forced into a stinking public toilet, made to travel in a crowded local train and visit a garbage dump. His own life is a mess of course and it takes not just psychiatric treatment but also Ahaan's uncomplicated intervention for Ozzy to find a way around his debilitating complexes.

With Abuli Mamaji playing the protagonist, we are invited to get accustomed to a character who does not, and need not, be what we expect a hero to be. It is easy to warm up to the actor because not only is there something overwhelmingly charming about him, he is also a man who clearly enjoys acting in front of the camera.

Actually, it isn't really acting that Mamaji is doing. He is himself on the screen, which lends the film its warmth, efficacy and authenticity. The actor also has a speech impairment, so it takes us a while to begin to grasp what he is saying. Parts of the lines that he delivers are distorted. But they are never unintelligible.

His dialogue delivery becomes a natural part of who Abuli Mamaji is as an actor and Ahaan is as a character. This is normal for him and we quickly learn to accept that. This is by far the biggest achievement of a film that also benefits from the contributions of a supporting cast that does full justice to the job of supporting an actor who is unlike them in every conceivable respect.

It redounds to the credit of the co-actors - Arif Zakaria, Niharika Singh and Plabita Borthakur - that they do not let the obvious adjustments that they have to make while working with someone as unique as Abuli Mamaji distract them from the job at hand. In fact, if anything, the interplay only enhances their performances because the exceptional nature of the lead actor keeps them on their toes.

The director deserves a pat on the back for not casting a regular actor in the role of a character with Down Syndrome. That would have been the easy way out. But it would have been far less effective. What we have in Ahaan in ample measure is the joy of watching an actor enact disability without having to take recourse to ersatz means.

Ahaan, like Abuli Mamaji's performance, is all heart. The film, modest in ambition but substantial in terms of impact, revels in the spirit of a man who is neither down nor out. It celebrates rather than laments and, therefore, strikes an instant chord.