Read inOther Languages
This Article is From Mar 23, 2020

Twitter took the star to task, pointing out that he should know better than to perpetuate this sort of unscientific thinking 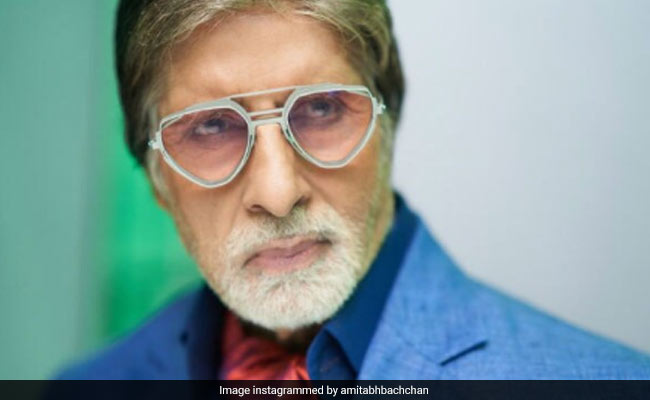 After being savaged on social media, actor Amitabh Bachchan on Monday deleted a tweet and Instagram post on the alleged bacteria-destroying powers of noise. The posts shared by the 77-year-old actor on his social media handles - Big B is among the most followed Indian celebrities online - repeated a snippet of superstition that has been doing the rounds ever since Prime Minister Narendra Modi asked citizens to clap and bang plates on Sunday evening. PM Modi's stated intent was to show appreciation for health workers, essential service providers and others who are putting themselves out there so that the rest of us may home quarantine; a WhatsApp forward, however, has been circulating the theory that rising decibel levels kill bacteria at the time of the new moon or "Amavasya."

Amitabh Bachchan, who has made it clear in the past that he alone handles his social media accounts, shared an image of himself with the text: "An opinion given: 5pm, 22nd March, "Amavasya," darkest day of month; virus, bacteria, evil force at max potential and power! Clapping, shankh vibrations reduce/destroy virus potency. Moon passing to new 'nakshatra' Revati. Cumulative vibration betters blood circulation." On Instagram, Big B added a disclaimer in the vein of "forwarded as received." 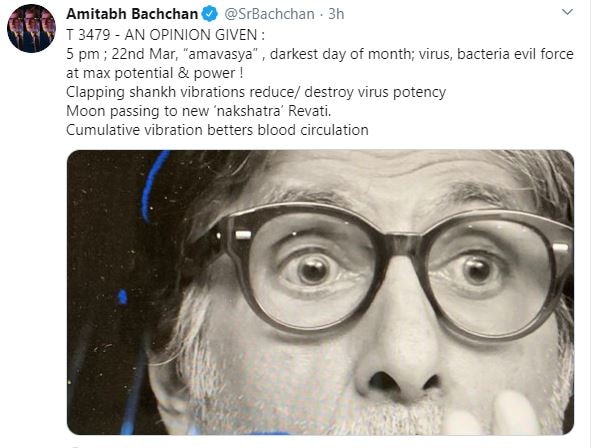 Outraged, Twitter took the star to task, pointing out that his was a commanding voice and that he should know better than to perpetuate this sort of unscientific thinking. "Indian lives are at stake here and you need to be more responsible," tweeted satirist Varun Grover. His rebuke was echoed by many others, many of whom ridiculed the 77-year-old actor:

Shameful superstitions propaganda coming from a person with such huge reach. And we have learned to let go of besharmi of many of our celebs but this is DANGEROUS too. Indian lives are at stake here and you need to be more responsible.

People like u shud tweet about providing better gear to the medical staff anf pressurise govt in to increasing Healthcare budget. sadly We post unnecessary shit like this which makes no sense. Fear of IT and ED raid I guess

Ok, please stop trolling Amitabh Bachchan. He's not mad. He only thinks clapping can destroy virus because his money is in Panama.

Sir? Why did you deleted the tweet? I was almost convinced. #LockdownNow#Covid_19india#AmitabhBachchanpic.twitter.com/oR2fIHVDix

Amitabh Bachchan has deleted the tweet. Keep the pressure up. Don't let anyone get away with any kind of nonsense.

Amitabh Bachchan and Shaina NC weren't the only ones guilty of irresponsibility. The forward has gone so viral that the Press Information Bureau's fact-checker posted an advisory:

Beware! Messages are being shared on Social media claiming that the risk of #Coronavirus in India has been reduced due to noise produced during the #JantaCurfew.#PIBFactCheck: Everyone is advised to not get misled and continue to practice #SocialDistancing and personal hygiene pic.twitter.com/dzUfG3lwXv

This lapse of judgement notwithstanding, Amitabh Bachchan, elder statesman of the film industry, has been leading the film industry's participation in spreading awareness about the pandemic. The Coronavirus originated at a seafood market in Wuhan, China, and has claimed thousands of lives globally. India is locking itself down in order to break the chain of transmission.