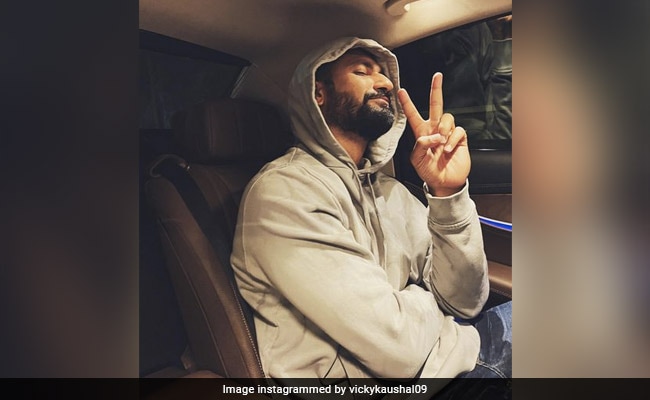 Vicky Kaushal started the day with a social media post and left his fans happy. The Raazi actor has completed a schedule for a film and has shared his experience. Sharing a candid photo of himself, Vicky Kaushal wrote, "Wrapped a schedule working with some of the loveliest people... Thodi khushi, thodi thakaan aur bohot saara satisfaction. Mazze!!! (Little happiness, little tired and a lot of satisfaction)." In the pic, Vicky is seen showing a victory sign and singer Ammy Virk commented, "Ok ji," followed by a red heart emoji.

Vicky Kaushal was shooting in Mussoorie for his next and was sharing surreal photos and videos and some BTS. A few days back, Vicky Kaushal had shared a photo of himself when he had visited a gurudwara. Dressed in a white kurta-pajama, Vicky was seen praying and had captioned his post as "Nirbhau. Nirvair," followed by a folding hands emoji. The post has more than 10 lakh likes.

When Vicky Kaushal was shooting in Mussoorie, he had shared a video and showed his fans glimpses of his shooting day and the beautiful place. Sharing a video, Vicky had written, "Mussoorie!!! Thank You for being so loving and breathtakingly beautiful. Leaving my heart behind in the mountains. See you soon!"

On the work front, Vicky Kaushal was last seen in Sardar Uddham, in which, his acting was highly praised. Next, he is shooting with Sara Ali Khan for his next. Vicky Kaushal also has Govinda Naam Mera with Bhumi Pednekar and Kiara Advani.