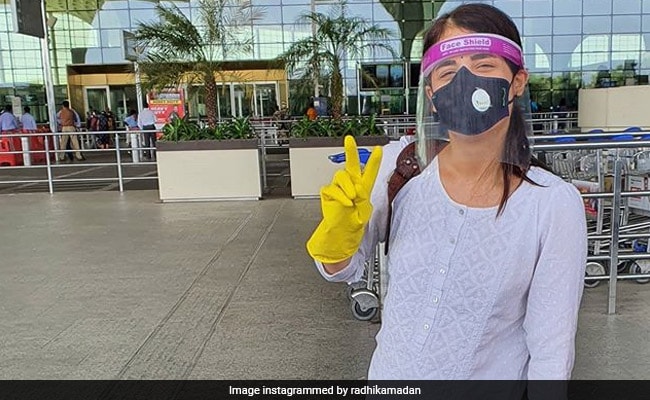 Angrezi Medium actress Radhika Madan, flying out of Mumbai a day after domestic flights resumed, gave us a glimpse of what is now the new airport look. Complying with new travel rules, Radhika wore a face shield and mask, adding gloves for good measure. Radhika posted a picture of herself outside Mumbai airport with the words, "Mai aa rahi hu Maa." She did not disclose her destination but the hashtag #homebound indicates she was likely flying to New Delhi, her hometown. The rest of Radhika's airport look was a simple white outfit and kolhapuri slippers - perhaps this is finally the end of the 'airport look,' which is hated and loved equally by the celebs it is seen on. Here's Radhika Madan's post:

Domestic flights resumed on Monday after two months of lockdown; 58,000 passengers flew on the first day, Civil Aviation Minister Hardeep Puri announced in a tweet. Day 1 was marred by chaos and confusion across airports because of last-minute restrictions on flights by some states causing cancellations. Maharashtra, where Radhika Madan was flying out of, had asked for more time before restarting air travel; however, it eventually decided to operate 25 flights in and 25 flights out off Mumbai.

Radhika Madan, who made her Bollywood debut with the 2018 comedy-drama Pataakha, Is not the only celebrity to have left for home recently. Days ago, Nawazuddin Siddiqui was given permission to return to his Uttar Pradesh hometown of Budhana; his sister died some months ago and, as the actor explained in a tweet, his mother had been subject to panic attacks since. Actress Pooja Bedi and fiancé Maneck Contractor drove from Mumbai to Goa, prompting criticism on social media for having no real reason to travel in the lockdown.