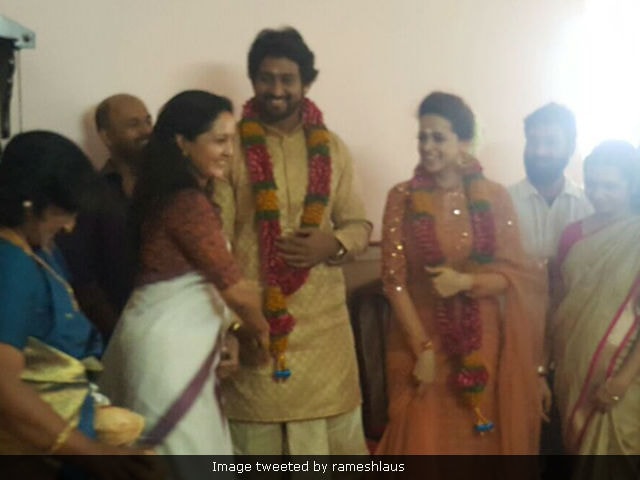 New Delhi: Malayalam film actress Bhavana got engaged to Telugu film producer Naveen on Thursday in a private ceremony, which was attended by close friends like actress Manju Warrier and the couple's family. The couple is reportedly looking forward to get married by the end of this year. A source close to Bhavana told news agency IANS on Thursday: "Bhavana and Naveen got engaged earlier today. It was a very private affair. The wedding is most likely to happen in August." Meanwhile, Bhavana and Naveen's colleagues have congratulated the couple on Facebook and Twitter. Ramya Subramanian and Nivin Pauly tweeted pictures from the ceremony which were circulated soon after the news of their engagement went viral. Anoop Menon and Prithviraj Sukumaran congratulated Naveen and Bhavana on Facebook. Anoop also wrote: No two ways about it, the best couple in recent times. So happy for dearest Bhavna and Naveen and for those who don't know him in person, he is a gem. Wishing them a great life ahead."

Here's what the industry people shared:

Congratulations on the engagement and wishing u a lifetime of happiness & love dear Bhavana! pic.twitter.com/mfbraGY4M1

Wishing both of you a lifetime of happiness and love. Congrats dear Bhavana and Naveen :) pic.twitter.com/YPhjYHzRHv

Bhavana made her relationship with Naveen official last year on a television show which was aired on a Malayalam channel. International Business Times quoted Bhavana as saying: "Yes, I am in a relationship, a serious relationship. I always wanted to be with a person who looks his life in a very matured manner."

Promoted
Listen to the latest songs, only on JioSaavn.com
Bhavana made her Malayalam film debut in 2002 with Nammal when she was all of 16. She won the Best Actress (Special Jury) trophy in Kerala State Awards for her role in the film. She went on to star in films like Chithiram Pesuthadi, Daivanamathil, Swapnakoodu and C.I.D. Moosa. Bhavana has also featured in Tamil film Chithiram Pesuthadi, Telugu film Ontari and Jackie in Kannada.

Bhavana was last seen in Malayalam film Kuttikalundu Sookshikkuka and her upcoming films are Vilakkumaram, Honey Bee 2: Celebrations and Adventures of Omanakkuttan.