"The one who completes us," Yash captioned the video of his son's naming ceremony on Instagram 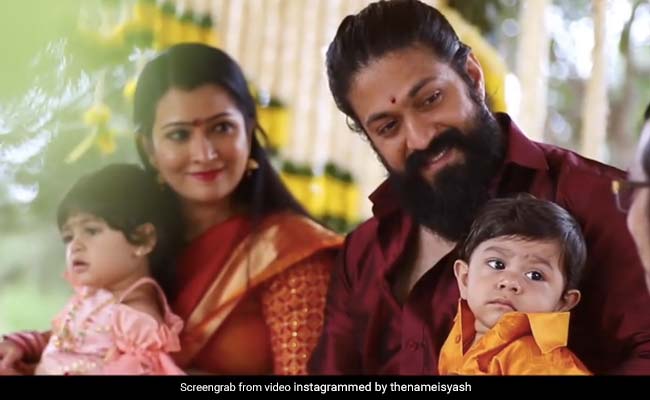 Here, take a look at how much fun Yash and his family had at Yatharv's naming ceremony:

In another post, Yash explained the meaning of Yatharv, revealing it's a "combination of our names YR and Ayra!"

Happy to see that all of u liked the name 'YATHARV' For all of u asking for the meaning it means 'Complete' We have coined this name as a combination of our names YR and Ayra! Special mention to our dear music director @ravibasrur who has yet again gifted us with a lovely song, @santhoshvenkysinger who has sung so beautifully and #Narthan who has penned the lyrics with so much love ????

When Yatharv was born last year, Yash had made the baby announcement with an imaginary baby conversation between Ayra and her newborn brother: "What she's trying to say is that she's got a new baby brother today. Her happiness is doubled, yaar. Can't wait for these baby conversations. Thank you for all your love and blessings. Will share more news shortly," Yash had captioned his post.

Yash and Radhika's kids often take up space on their Instagram accounts and the posts are so adorable:

Best way to start the year is to look at life like a child - with lil excitement, lil joy and lots of innocence. Wishing you all a Very Happy New Year! #TheNameIsYash #Happy2020

Yash is best known for his role in the critically acclaimed KGF-Chapter 1. He is now busy with the second part of the film, which went on floors in March last year and is scheduled to release on October 23 this year. Yash returns as the protagonist in the second part, only this time, he's pitched against Sanjay Dutt, who plays the antagonist.