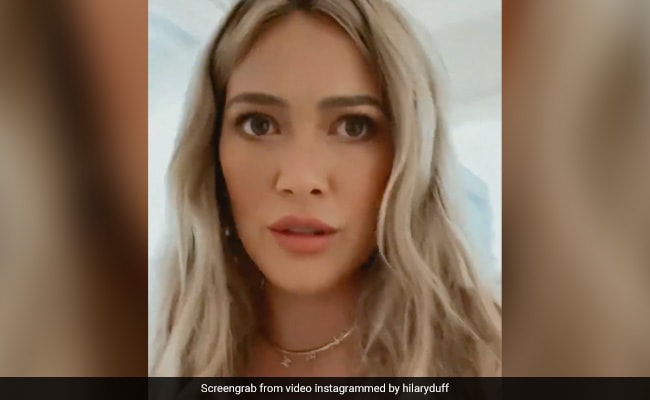 Hilary Duff in a still from the video. (courtesy hilaryduff)

Lizzie McGuire star Hilary Duff has contracted the delta variant of Covid-19. The 33-year-old actress, in a recent Instagram story, posted a picture of herself and she revealed that she has tested positive for the Delta variant just days after she started shooting for the new sitcom How I Met Your Father. Hilary Duff stated in the Instagram story that her symptoms consisted of a "bad headache," a loss of taste and smell, "sinus pressure" and "brain fog." She had captioned the story: "That delta ... she's a little b****. Symptoms: bad headache. No taste or smell, sinus pressure, brain fog." The actress had also mentioned in her story that she has been vaccinated. "Happy to be vaxxed," she wrote, adding a peace emoji.

Hilary Duff's Instagram story arrived just a few days after she posted a picture from the sets of How I Met Your Father. In the picture, the former Disney star can be seen posing with her co-stars for the upcoming Hulu series.

Hilary Duff married her long-time boyfriend Matthew Koma at an intimate ceremony at their Los Angeles home in 2019. Hilary and Matthew welcomed their first child together - Banks Violet Bair in October 2018. In March this year, the couple's second child together, also a daughter, was born. Earlier, Hilary Duff was married to Mike Comrie, with whom she has a son named Luca Cruz Comrie.

Beyonce, Breakfast At Tiffany's And Beyond: Twitter On The 128-Carat Diamond She Wore