"For the rest of forever," Matthew Koma wrote 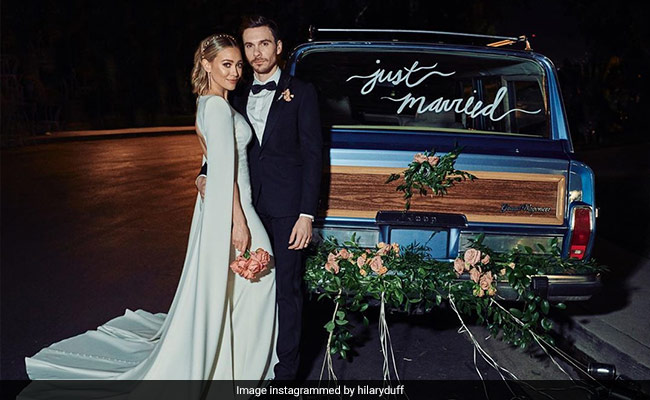 Hilary Duff's latest Instagram entry calls for congratulations. Why, you ask? Well, the 32-year-old actress is now married. Hilary married her long-time boyfriend Matthew Koma at an intimate ceremony at their Los Angeles home on Saturday, a source close to the couple told Entertainment Tonight. On Monday morning, Hilary shared a picture of herself along with her husband, posing next to a car, which had the text 'Just Married' printed on it. Hilary, dressed in her bridal outfit, can be seen smiling with all her heart as she stands next to her husband. "This," she captioned the post while Matthew wrote "first" in the comments section.

Meanwhile, Matthew shared an identical picture on his Instagram profile and he captioned it: "For the rest of forever." Take a look at the picture here:

The reports of Hilary Duff and Matthew Koma's romance surfaced in 2017. However, the couple split in March that year. They got back together later in 2017 and have been together ever since. Hilary and Matthew welcomed their first child together - Banks Violet Bair in October last year. Earlier, Hilary Duff was married to Mike Comrie, with whom she has a 7-year-old son Luca Cruz Comrie.

Hilary Duff is best-known for her role in the comedy series Lizzie McGuire. She has featured in films such as Agent Cody Banks (2003), Cheaper By The Dozen (2003), A Cinderella Story (2004), Material Girls, The Perfect Man and Cheaper By The Dozen 2  among many others. On the work front, the actress was last seen inThe Haunting of Sharon Tate.