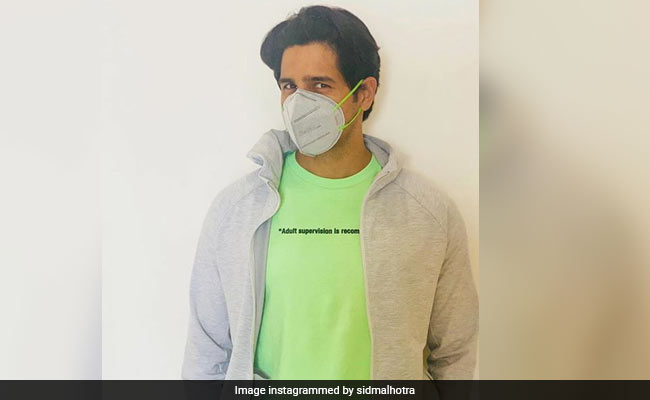 Bollywood actor Sidharth Malhotra posted a picture of himself wearing a mask on his Instagram profile on Tuesday. The 35-year-old actor, in his caption wrote: "Trying to adapt to the new normal lifestyle." He accompanied the post with the hashtags #MaskOn, #MatchingByChance and #StayHomeStaySafe. In the comments section, Milap Zaveri, who directed Sidharth's last film Marjaavaan, quoted a fan from Twitter and wrote: "As some fan named Lav said on twitter, last year, "Tu mass hero banaa, is saal mask hero."

On Father's Day this year, Sidharth shared a set of throwback pictures on social media and wrote: "Happy Father's Day, dad. Love you to the ocean and back. You will always be the captain of our ship! Big virtual hug."

Happy #FathersDay Dad, Love u to the ocean and back, You will always be the captain of our ship! Big virtual hug

During the lockdown, Sidharth shared a throwback picture and he captioned it: "Ready with my shades for the sun and some fun outdoors ....My balcony."

Ready with my shades for the sun n some fun outdoors .... my balcony! #Lockdown4 #StayHome

Sidharth Malhotra, who made his Bollywood debut with the 2012 film Student Of The Year, alongside Alia Bhatt and Varun Dhawan, has featured in films like Aiyaary, Baar Baar Dekho, Jabariya Jodi, and Hasee Toh Phasee, among others. His last film was Marjaavaan, alongside Riteish Deshmukh and Tara Sutaria. The actor will next be seen in Shershaah, alongside Kiara Advani.

Earlier this year, Sidharth Malhotra featured in Masakali 2.0, alongside Tara Sutaria, which received major flak from viewers as well as the makers of the original track.