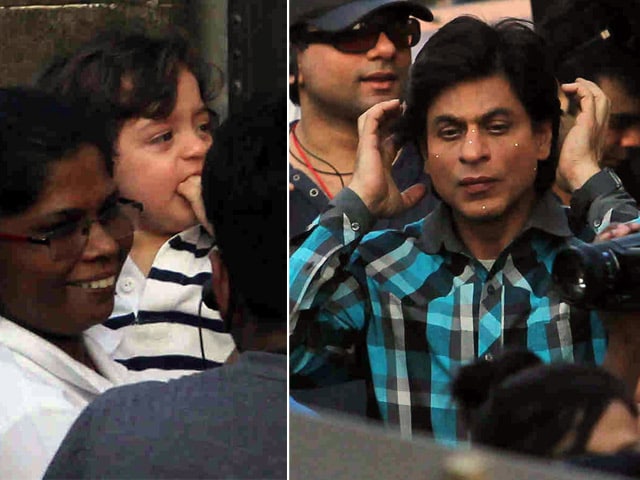 Bollywood superstar Shah Rukh Khan's next film is quite close to home. Literally.

The superstar was spotted shooting for director Maneesh Sharma's Fan outside his Mumbai residence 'Mannat' and apart from a gigantic crew, Shah Rukh was accompanied by his pint-sized toddler AbRam.

AbRam was being looked after by his nanny on the sets and looked absorbed in proceedings. This is not the first time, however, that Shah Rukh has celebrated 'bring your child to work day'. Little AbRam watched SRK work on his last release Happy New Year. In fact, AbRam's day on set also featured in the movie as the credits rolled.

Shah Rukh, who introduced the world to his youngest son on Twitter only a year after he was born, now seems to be resigned to letting AbRam be photographed by paparazzi.

Meanwhile, for the Yash Rash Film production, Shah Rukh was seen sporting a shaggy hairdo and dressed in a checked shirt and denims. The actor, who commands a vast fan following across the globe, will be seen in the role of an ardent admirer of a superstar himself in the film.

Promoted
Listen to the latest songs, only on JioSaavn.com
Earlier this month, Shah Rukh was at the CounterPunch Studios in Los Angeles to have his face digitally scanned for the special effects in the second schedule of the film. (Also Read: Shah Rukh Khan Undergoes Digital 3D Face Scanning For Fan)

Fan is slated to release on August 14 next year.