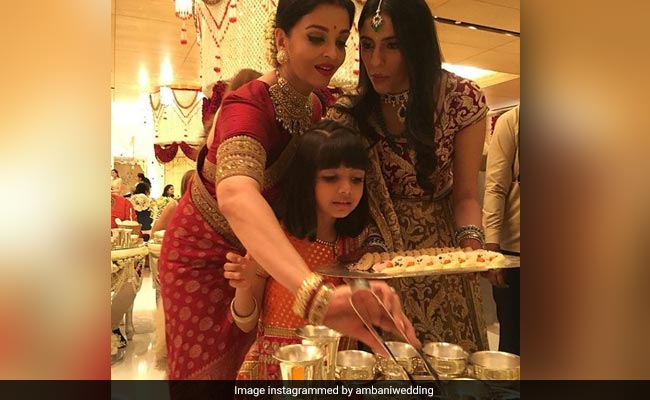 An inside photo from Isha Ambani's wedding (courtesy ambaniwedding)

Following Isha Ambani and Anand Piramal's big fat wedding in Mumbai on December 12, photos of the Bachchans and the Khans serving dinner to the guests at the shaadi went crazy viral on social media. While pictures of Shah Rukh Khan, Aamir Khan, Amitabh, Abhishek, Aishwarya Rai and even seven-year-old Aaradhya Bachchan attending to the guests had intrigued the Internet, Abhishek Bachchan explained the actual reason behind the gesture in a recent Twitter chat with fans. On Sunday, Abhishek was asked: "Why were Aamir Khan and Amitabh Bachchan serving food at Ambani wedding?" when he said it's a custom traditionally followed by the bride's side that they personally serve food to the groom's family. "It is a tradition called "sajjan ghot". The bride's family feeds the groom's family," tweeted Abhishek.

It is a tradition called "sajjan ghot". The brides family feeds the grooms family.

Meanwhile, here are some of the aforementioned photos from Isha Ambani's wedding:

The Bachchans and Shah Rukh Khan were also part of Isha Ambani's pre-wedding celebrations in Udaipur. Shah Rukh and wife Gauri performed at the sangeet and set the stage on fire while the ladkiwale and ladkewale also cheered for Aishwarya and Abhishek, who danced to Tere Bina at the function.

On stage after decades ....in a @falgunishanepeacockindia outfit, they definitely know how to make it dramatic and timeless

It was not just the Bachchans and the Khans who represented Bollywood at Isha Ambani's wedding in Mumbai on Wednesday. The star-studded guest list also featured names such as Deepika Padukone, Ranveer Singh, Priyanka Chopra, Nick Jonas, Sonam Kapoor, Kareena Kapoor, Jacqueline Fernandez, Karan Johar and others. Actor-politician Rajinikanth also attended Isha Ambani's wedding and so did a bevy of politicians, including former President Pranab Mukherjee, Sharad Pawar, Rajnath Singh, Mamata Banerjee, Maneka Gandhi and others.