Aaradhya Bachchan is the youngest grandchild of Jaya and Amitabh Bachchan 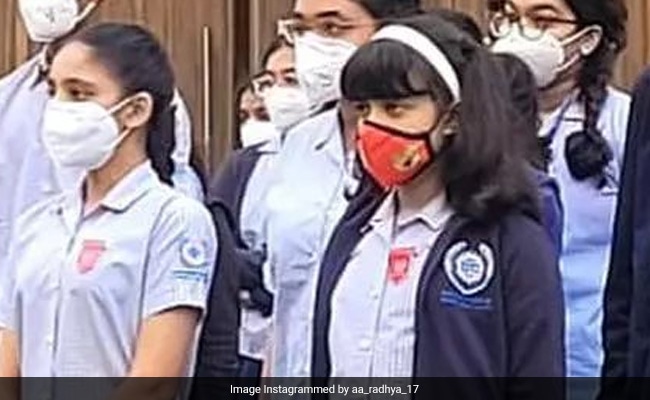 Aishwarya Rai and Abhishek Bachchan's daughter, Aaradhya Bachchan, is the most popular star kids in b-town. Often, her pictures with parents or grandparents- Amitabh Bachchan and Jaya Bachchan go viral on the internet. However, this time, her latest viral image is from her school. Aaradhya Bachchan, who studies at Dhirubhai Ambani International School, can be seen wearing a mask due to the COVID-19 pandemic in the viral picture. She is standing at the school ground along with other students. As per the caption, the image is from the Republic Day celebrations held in her school.

Soon after the image was shared on Instagram, fans bombarded the comment section. One of the users wrote, "Not because she is Bachchan. Just if we compare her among. Her wearing and body language is superb among other," while another called her cute, "she is so cute". Check out the viral picture below:

It is not the first time a picture of Aaradhya Bachchan has gone viral. Earlier, a video was doing rounds on all social media platforms where she was seen reciting a poem in Hindi. Soon after it went viral, fans were impressed and hailed her Hindi pronunciation.

Meanwhile, she was recently papped with her parents-Aishwarya Rai and Abhishek Bachchan, before jetting off to an undisclosed location for a quick vacation.

Talking about Abhishek, he is creating a heavy buzz on social media platforms owing to the release of his upcoming film Dasvi's trailer. The film is slated to release on April 7, 2022. He also has SSS-7 in his kitty. While, Aishwarya will be next seen in Ponniyin Selvan 1.