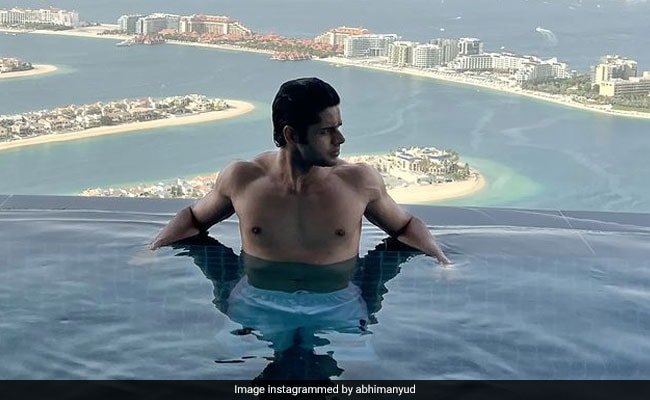 Abhimanyu Dassani is one of the most promising newcomers to look forward to in Bollywood. With his films making all the right noises, the actor also enjoys an enviable fan base on Instagram. On Thursday, his fans were in for a treat when he shared a picture of himself chilling in a swimming pool with the stunning beach and skyline of Dubai in the background. While Abhimanyu's cool photo has followers making a beeline for the comments section, his caption also caught everyone's attention. In the caption, he wrote, “Your view deep-ends on your mood. This is mine.” Fans replied to the post with fire emojis and hearts.

Actor Karan Wahi replied to the post by saying, “Basic Life,” with a wink emoji.

Recently, the official Instagram page of the team shared images from the match in Dubai. The post features glimpses of Abhishek Bachchan, Ranbir Kapoor and Kartik Aaryan in action before and during the match. The caption said, “What a game day in Dubai looks like.”

A post shared by All Stars Football Club (@allstarsfc_pfh)

Abhimanyu Dassani also shared a collage of two images of him on the football field, earlier this week. In the caption, he wrote, “You can say I got a kick out of it. Playing for All Stars Football Club vs the Emirates United at the Al-Maktoum stadium.”

Abhimanyu Dassani is the son of Maine Pyar Kiya actress Bhagyashree. He made his debut in 2018 with Mard Ko Dard Nahi Hota. He was most recently seen in Netflix's Meenakshi Sundareshwar.