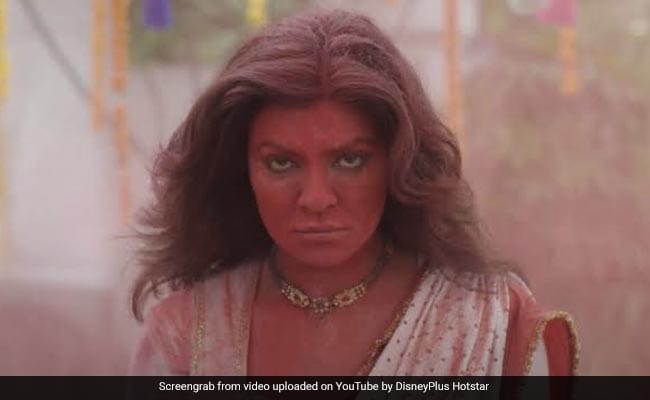 Aarya 2 Review: Sushmita Sen in a still from the series the series. (Image courtesy: YouTube )

The second season of a web show, no matter how well-received it might have been, has to inevitably contend with the old-wine-in-old bottle syndrome. Aarya, a Hotstar Specials show adapted from the Dutch crime drama series Penoza, does a commendable job of averting the pitfall and delivering eight episodes that chart their own course.

Series creator Ram Madhvani makes a calculated shift in the show's narrative drift, recalibrating its tone and texture ever so slightly. Sushmita Sen's interpretation of a tormented but tenacious woman is magnificently pitch perfect, while the cinematography (Sudip Sengupta), editing (Khusboo Raj and Abhimanyu Chaudhary) and the musical score (Vishal Khurana) are all first-string.

Sushmita Sen carries on from where she left off in Season 1. With nary a false step, she delivers another exceptional performance packed with power, tempered with restraint and elevated with an instinctive feel for the workings of the mind of a harried single mother struggling to shrug off her past and forge a tenable future in an inimical world where it is tough to tell friend from foe.

On her hesitant return from Australia to depose in court against her family, Aarya Sareen faces a vicious attack that leaves her with a bullet wound. It strengthens her resolve to flee back to safety outside India, but neither her daughter Aru (Virti Vaghani) nor the subsequent turn of events allow her to beat a hasty retreat.

Season 2 of Aarya steers clear of all Bollywood excess and adopts an even-handed storytelling style that bolsters both consistency and force. It packs a hefty punch without having to resort to superfluous means. What that does is whet our appetite for more.

The closing moments of the final episode throw the door open for another season. "Yeh kahani abhi khatam nahi hui hai (this story hasn't ended yet)," says a man whose identity we know but whose face we do not see. "Yeh kahani toh abhi shuru hui hai (indeed, the story has just begun)," the protagonist retorts. We certainly aren't complaining.

Season 2 is, for sure, not as high-octane nor as visceral as the first nine episodes of Aarya. It is none the worse for it. Its ambling rhythm allows room for the ambiguities inherent in the clash between personal interests and ethical questions. Even those who kill without a twinge of remorse, including the goons who unquestioningly serve their masters, aren't heartless monsters.

Conversely, those who swear by their family, friends and a supposed sense of fair play, including Aarya herself, think nothing of making morally questionable choices, impervious to the consequences of their acts on themselves and on their victims. Aarya is a deliciously dark and dodgy saga, but it is unwaveringly human at its core. The new season plays up to greater effect than before the psychological duality that dogs the heroine.

It reveals the fine line that separates outright lying and simply holding back the truth. Everybody in Aarya, from the seemingly humane heroine determined to protect her family at all costs to the gruff musclemen and assassins who stop at nothing to carry out the orders of their bosses, has weaknesses.

Ram Madhvani treats the contradictions as they should be - without over-explaining the contradictory impulses and compulsions of Aarya or the individuals around her who push her towards desperate measures. The show's dramatic peaks, delivered with sustained control, are evenly spaced out. The crucial plot twists - these are centered in the main on the sly, self-serving machinations of two suave patriarchs, wolves in sheep's clothing, and their henchmen - are mined for maximum impact.

Scripted by Sanyuktha Chawla Shaikh and Anu Singh Choudhary, with additional writing inputs provided by Vinod Rawat, Kapil Sharma (both co-directors of the show with Madhvani), Khusboo Raj and Abhimanyu Chaudhary, Aarya S2 has fewer characters, sharper delineation of their motivations, more gripping dramatic highs and markedly more subdued, sinewy conflicts between the protagonist and her enemies, the principal ones being within her own extended family.

As she returns to India and the past catches up with her, Aarya faces provocations and threats, besides unsettling family crises stemming from the impact of her husband's violent death on her young children, especially her teenage daughter Arundhati, who is coming off a suicide attempt, and her traumatized nine-year-old son Aditya (Pratyaksh Panwar), the only eyewitness to the murder of Tej Sareen (Chandrachur Singh in an S1 cameo).

Aarya's first-born, Veer (Viren Vazirani), stands by her side through thick and thin. Her friend Maya (Maya Sarao), who, too, lost her husband (played by Namit Das in S1) in the internecine wars precipitated by a Rs 300-crore drug heist, lends Aarya her unstinted moral and physical support.

And the strong and discreet Daulat Singh (Sikandar Kher), Zorawar Rathod's trusted factotum, has her back round the clock. But eventually it is for Aarya herself to take matters in her hands and bare her claws as the men around her seek to decide her fate.

In the process, she pulls out the stops to shield herself and her three children. Her terminally ill father Zorawar Rathore (Jayant Kripalani), Udayveer Shekhawat (Akash Khurana), extradited from Germany to stand trial and seek vengeance for the killing of his drug dealer-son, and her brother Sangram Singh Rathore (Ankur Bhatia) conspire against her with varying motives.

Sampat (Vishwajeet Pradhan), Udayveer's hitman, keeps snapping at Aarya's heels at the behest of his boss, forcing her hand to such an extent that she is compelled to throw caution to the wind and act against her own better sense.

This time around, ACP Younus Khan (Vikas Kumar, terrific again), who, in Season 1, had co-opted Aarya to bust an international drug cartel operating in the guise of a pharmaceutical business and helped her flee to New Zealand under a witness protection programme, is out to make her pay for going back on her promise to testify against her family in the Tej Sareen murder case.

Khan is confident that Zorawar, Sangram and Udayveer are now only one deposition on away from being sentenced. In the courtroom, Aarya does a U-turn under oath, dashing the police officer's hopes and earning his ire in the bargain. Aarya is now under attack from all sides, including her troubled daughter Aru, and is hence more determined than ever before to get away from it all.

The screenplay gives short shrift to Geetanjali Kulkarni, as a policewoman fishing in troubled waters, Shataf Figar, playing the father of a classmate of Aarya's younger son. There isn't much else that the show does not get right.