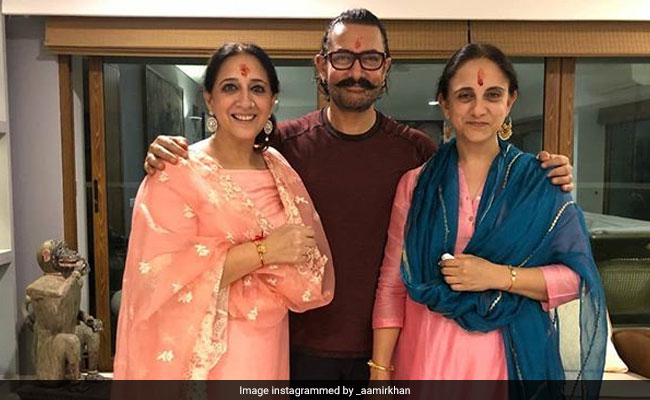 Aamir Khan's sister Nikhat is reportedly making her film debut with upcoming movie Saand Ki Aankh, featuring Taapsee Pannu and Bhumi Pednekar in lead roles. As per a Pinkvilla report, Nikhat Khan has a pivotal role in the film, which is based on the life of sharpshooters Chandro Tomar and her sister-in-law Prakashi Tomar. A source told Pinkvilla: "Along with the character of the shooter dadis, there are several roles that are integral to the film's plotline. One will be essayed by Aamir Khan's sister Nikhat Khan. This will be her debut in films and although not many knew of her, when one of the makers met her and suggested her name, the entire team knew she was best suited for the role."

The source divulged a few details of Nikhat Khan's role and said: "She plays a maharani in the film. It's not a cameo or an appearance. Instead, it's a full-fledged role. Her character has some really important sequences."

Nikhat Khan on Thursday also attended the wrap-up party of Saand Ki Aankh with Taapsee and Bhumi. Apart from Nikhat, Aamir's brother Faisal Khan also tried his luck in films but his career was short-lived.

Saand Ki Aankh also stars Prakash Jha and Vineet Kumar Singh (of Mukkabaaz and Gangs Of Wasseypur series). The film focusses on the lives of Chandro and Prakashi Tomar, two octogenarian sharpshooters from Uttar Pradesh, who changed the ecosystem for women and society around them.