Aamir Khan shares a post on Micchami Dukkadam every year 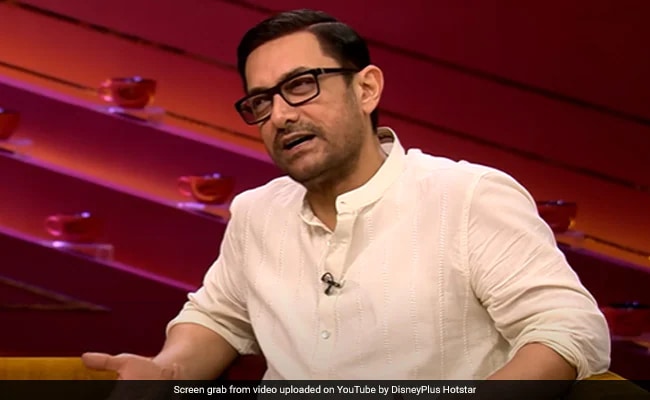 Aamir Khan on the Koffee With Karan 7 sets .(courtesy: YouTube)

Aamir Khan, on the occasion of Micchami Dukkadam, the day of seeking forgiveness for wrongdoings, shared a video clip on Thursday morning. Aamir Khan, who is a social media recluse, shares details pertaining to his films and other projects on Aamir Khan Productions' Twitter and Instagram handles. This year too, on Micchami Dukkadam, a video clip was shared on both Twitter and Instagram account of Aamir Khan Productions' accounts. After briefly deleting the video from social media, it was posted again on Thursday afternoon after fixing a typo. The previous version of the video had a typo. In the re-posed video, the word insaan (which previously read "insane"), was fixed.The clip began with the words "Michami Dukkadam." A voice over in the post adds, "Hum sab insaan hai aur galtiyan humse hi hoti hain... kabhi bol se, kabhi harkaton se, kabhi anjaane mein, kabhi gusse mein, kabhi mazak mein, kabhi nahi baat karne se. Agar maine kisi bhi kisi bhi tarah se aapka dil duhakya ho...toh mann vachan kaya se shama mangte hoon (All of us are human beings and we only make mistakes. Sometimes through our words and sometimes by our actions, at times we do it without knowing and at times when we are angry. We also hurt people with our humour and sometimes with our silence. If I have hurt your feelings in any way ever then I ask for your forgiveness with my heart, promise and being)."

Aamir Khan's last release Laal Singh Chaddha, became the target of Twitter boycott trend. The boycott trend against the film began after a section of the Internet dug out Aamir Khan's 2015 interview bits, where he said that his ex-filmmaker wife Kiran Rao had suggested they move countries because of "growing intolerance." His comments had provoked nationwide protests.

Before the film's release, Aamir Khan had requested the audience to give his film a fair chance and had said in an interview wit news agency PTI: "That Boycott Bollywood... Boycott Aamir Khan... Boycott Laal Singh Chaddha... I feel sad also because a lot of people who are saying this in their hearts believe I am someone who doesn't like India... In their hearts they believe that... And that's quite untrue. I really love the country... That's how I am. It is rather unfortunate if some people feel that way. I want to assure everyone that it's not the case so please don't boycott my films, please watch my films."