Aahana Kumra clarified that while Sajid Khan did not make unwelcome advances at her, he continued with the conversation in his own room 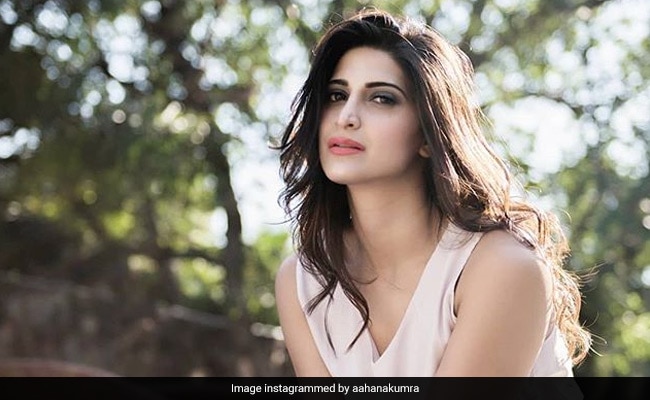 Actress Aahana Kumra, who is best known for starring in Lipstick Under My Burkha, recently opened up about an unpleasant encounter with #MeToo accused filmmaker Sajid Khan in an interview with Bombay Times. Last month, Sajid Khan was implicated in sexual harassment allegations in three separate #MeToo accounts by actresses Saloni Chopra and Rachel White and journalist Karishma Upadhyay. Making a direct reference to Saloni Chopra's account, Ms Kumra revealed that Sajid Khan attempted something similar with her: "I met him and he did the same thing that Saloni has written about him. Same drill - you go to his house, you are escorted to his room which is pretty dark. He makes you watch what he's watching," Ms Kumra said in the interview.

Aahana Kumra clarified that while Sajid Khan did not make unwelcome advances at her, he continued with the conversation in his own room: "He did not make a pass at me but he wanted to get to know me. When I asked him why can't we sit outside, he said that his mother was sitting there so why trouble her. I asked him to switch on the lights of the room, which he did," she said.

Aahana Kumra, who said she was well aware of Sajid Khan's reputation as "shady" while scheduling the interview, added in her interview that the filmmaker asked her "bizarre questions", which are too vile to be reproduced here. "I told him my mom's a police officer, which I think made him behave," she also said. Recounting a previous incident, Ms Kumra also said that Sajid Khan allegedly once sent her a text message implying disbelief over seeing a bikini shot of hers. "Sajid Khan once messaged me, 'Oh, you can look hot in a bikini also!'" Bombay Times quoted the actress as saying.

Following the barrage of allegations against Sajid Khan, he resigned as the director of Housefull 4 on October 12 and explained his decision to step down as a "moral responsibility": "In the wake of the allegations against me and the pressure being put on my family, my producer and the stars of my film Housefull 4, I must take the moral responsibility of stepping down from my directorial post, till the time I can allay the allegations and prove the truth." Read his full statement below.

Sajid Khan was outed as an alleged sexual predator after Saloni Chopra, who once worked with him, accused the filmmaker of harassing her mentally, emotionally and sexually followed by accusations from Rachel White, who alleged Mr Khan asked her to "seduce him in 5 minutes" for a role. In her account, Karishma Upadhyay claimed that Sajid Khan started an interview with "trash talk" and added he tried to forcibly kiss her when she was trying to leave the room. Read Saloni Chopra's account here:

In her interview, Aahana Kumra has also alleged that celebrity manager Anirban Das Blah once invited her to a hotel room to "negotiate there". "That's the normal conversation he has with women. The day I chatted with him, I was shaken," said Ms Kumra. Last month, Anirban Blah, who was the founder of KWAN Entertainment, was fired from his post following allegations of sexual advances towards women, after which he reportedly attempted suicide. Mr Blah was also reportedly removed as advisory member of Deepika Padukone's The Live Love Laugh foundation.

Meanwhile, Aahana Kumra also posted this on her Instagram:

Today has been an extremely overwhelming day for me! I shared a story of my experiences. Good bad and ugly all of it and I agree I was at fault too in my choices and decisions. Today it has given me the strength to be who I am and the people I choose to keep in my life. It's not easy for anyone and I know that. I changed for myself and my sanity. Thankfully women and men are opening up and speaking fearlessly. For those who stood by me and for those who taught me the lessons. I'm grateful to all! Thank you @mumbaigirl14 @thetimesofindia for being such a wonderful friend who heard me without judgement and gave me the opportunity to share my story. @bombaytimes This poem is relevant to me more than ever now. "Where the mind is without fear and the head is held high Where knowledge is free Where the world has not been broken up into fragments By narrow domestic walls Where words come out from the depth of truth Where tireless striving stretches its arms towards perfection Where the clear stream of reason has not lost its way Into the dreary desert sand of dead habit Where the mind is led forward by thee Into ever-widening thought and action Into that heaven of freedom, my Father, let my country awake." - Rabindranath Tagore #metoo #metooindia #metoomovement

After Sajid Khan's exit from Housefull 4, the film will now be directed by Farhad Samji. Nana Patekar, who remains accused of harassing actress Tanushree Dutta a decade ago, also quit the film's cast and has reportedly been replaced by Rana Daggubati. Akshay Kumar, who headlines Housefull 4 had cancelled the film's shoot in the wake of the #MeToo allegations against members of the cast and crew. At the same time, Sajid Khan's filmmaker sister Farah Khan had responded to the many allegations against Sajid with this statement: "This is a heart-breaking time for my family. We have to work through some very difficult issues. If my brother has behaved in this manner he has a lot to atone for. I don't in any way endorse this behaviour and Stand in solidarity with any woman who has been hurt."

The #MeToo movement caught up with the Hindi film industry as Tanushree Dutta revived a decade-old case of sexual harassment against Nana Patekar. Prominent personalities such as Alok Nath, Subhash Ghai, Vikas Bahl and Kailash Kher among others have been outed as alleged sexual predators in several heart-wrenching #MeToo stories.