"Thank you for watching, enjoying and loving the hard work of the entire team," wrote Madhuri Dixit for her fans 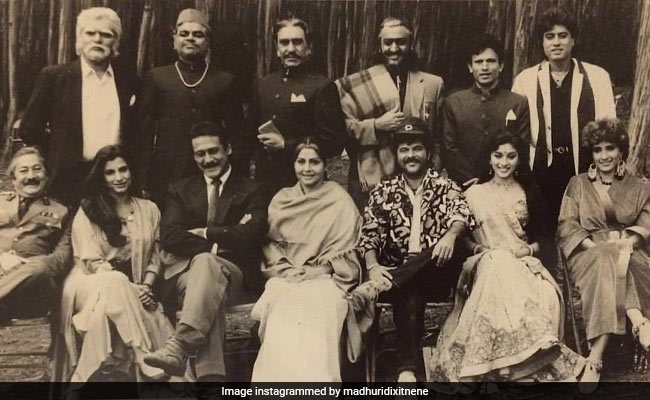 Anil Kapoor, Jackie Shroff and Madhuri Dixit's 1989 hit Ram Lakhan completed 32 years on Wednesday and on the occasion, the actress posted a "wonderful memory" from the sets of the film on her Instagram profile. Ram Lakhan, directed by Subhash Ghai, released on January 27, 1989. The film also starred Dimple Kapadia, late actors Amrish Puri and Saeed Jaffrey, Gulshan Grover, Rakhee, Paresh Rawal, Raza Murad and Anu Kapoor. In the throwback photo, the cast of the film can be seen posing for a happy group photo on the set. "Celebrating #32YearsOfRamLakhan and the wonderful memories we made while working on the film," wrote Madhuri Dixit and thanked her fans making Ram Lakhan a superhit film: "Thank you for watching, enjoying and loving the hard work of the entire team."

Earlier in the day, Subhash Ghai shared a picture collage featuring throwback pictures of himself with Anil Kapoor, Jackie Shroff and some crew members. "Jan 27, 1989 is as fresh today as it was 32 years back just for its cinematic narrative music and immortal characters on screen," he wrote.

Last year, reports about Ram Lakhan sequel surfaced on the Internet. However, neither the actors not the makers confirmed the reports. But, but, but, Jackie Shroff and Anil Kapoor teased their fans about doing a film together in last September. Here's what happened - Anil Kapoor posted a video of himself sprinting on the beach in Alibaug and on that post, Jackie Shroff commented: "Bhidu bhari," reacting to which Anil Kapoor wrote: "Jackie Shroff, get ready for our next together... team working on it."

The tracks My Name Is Lakhan and Tera Naam Liya from Ram Lakhan are still our favourites.